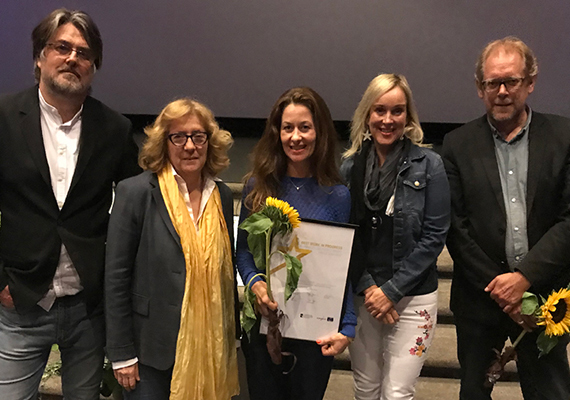 On Thursday evening, the Eurimages Lab Project Award of €50,000 was handed out for the fourth time in Haugesund. The recipient was Gritt [+see also:
film review
trailer
interview: Itonje Søimer Guttormsen
film profile] (working title: Burning Man) by director Itonje Søimer Guttormsen, who is also co-producing it with Marie Ekerhovd.

The intention of the Eurimages Lab Project Award is to reward the most promising “cutting edge” film in the works-in-progress part of New Nordic Films. The award is given to a film that is experimental, either in form or content, or which edges outside of the traditional film-production framework. It should also be a result of international co-operation. The films presented as works in progress are either in production or post-production. The award is intended to contribute to the completion of the film.

An enthusiastic jury – consisting of Romanian director Csaba Bereczki, international programme coordinator for the Thessaloniki International Film Festival Ilse Acevedo, Norwegian film consultant and film critic Kalle Løchen, and Danish producer Marianne Slot – stated the following regarding Gritt: “Elements of this project that caught the jury’s attention in particular included the clear authorial direction, the good use of rhythm and the original cinematographic exploration of the main character’s road trip whilst she confronts some extreme situations.”

The film is a loose sequel to Itonje Søimer Guttormsen’s award-winning 2016 short Retrett, centring on Gritt, a struggling movement artist. Gritt, which will also be Guttormsen’s feature debut, invites us to follow Gritt’s new adventures a year after the events of Retrett.

The industry awards presented at the 2018 edition of New Nordic Films in Haugesund on Thursday also included the Next Nordic Generation Award, given to the best film from the Nordic film schools, which this year was deemed to be The 99 Steps Left from the Square, directed by Sevgi Eker from Aalto University, Finland. The Best Project Award, for the best project in the Nordic Co-Production Market, went to One-off Incident (X10) by director Kirsikka Saari and producer Elli Toivoniemi, for Tuffi Films.

in this country focus