The European Audiovisual Observatory presented the first results of the Mapping of the Animation Industry in Europe study, funded by Creative Europe, during the MIFA workshop hold on 17 June 2015 and co-organised by the Observatory and the European Commission.

Around 150 participants at MIFA gathered to see the presentation of the Focus on Animation report DOWNLOADABLE HERE, the first publication of this major research project. The publication was presented by Marta Jiménez Pumares, Deirdre Kevin and Julio Talavera Milla of the European Audiovisual Observatory. The conference was opened by Lucía Recalde of the Creative Europe MEDIA sub-programme of the European Commission. A panel of experts ably chaired by Christophe Erbes, then discussed the findings and the general challenges and opportunities for the industry.

Opening the Annecy conference this morning, Lucia Recalde stated: "The cultural and creative sectors represent a key driver for growth and jobs in Europe. It is our role to support the development of these industries, to help them thrive in the digital era and to make sure that cultural diversity is at the heart of our actions. As we can see today, the animation industry is an extremely promising sector. In terms of audience, animation is also one of the branches of the audiovisual sector with the greatest potential in export. We are already supporting the animation industry via the MEDIA sub-programme of Creative Europe. Today's analysis is a very important contribution to our work. It will help us analyse how we can further support the sector. I am looking forward to getting the full report and presenting the findings with the Observatory in Paris later this year."

Animation films achieved an average of 179.8 million admissions in Europe over the period 2010-2014, representing 14.7% of the market in 2014. Russia, UK & Ireland and France were the largest market for animation in Europe, the three accounting for more than half of the yearly average 179.8 million admissions to animation in Europe. However, when it comes to the share of animation in each country, smaller territories such as the three Baltic states and Slovakia and Slovenia stand out, with Latvia topping the ranking with 26% of local admissions going to animation films. 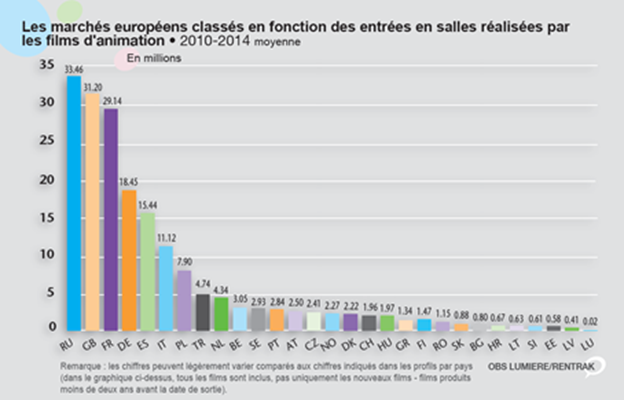 188 new animation films (produced in 2014 or up to two years before) were on release in the European Union in 2014, 107 of which were produced in the EU. Compared to the average 33.3% market share for European films in Europe, European animation got a thinner slice of the pie in proportion, with only 20% of the market share for animation in 2014. In turn, the 44 American films on release accounted for most of the box office for animation that year (71.6% of the admissions). Furthermore, there is a huge concentration at the top by admissions; the 20 highest-grossing European animation films on release between 2010 and 2014 achieved 84% of the admissions to animation in Europe.

250 European feature animation films were produced (and released) between 2010 and 2014, representing just 3% of the production volume and 3% of the total European admissions. France, Spain and the UK were the main producers of animation, accounting for 40% of the overall production of animation in Europe. In turn, medium and low volume production countries like Belgium, Luxembourg or Ireland stand out as minority partners. 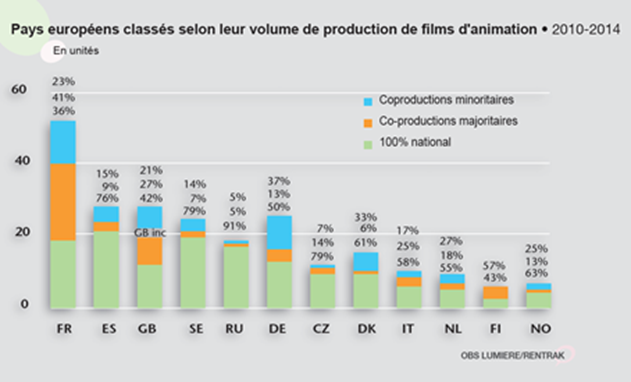 A panel of experts, including Luca Milano of RAI Fiction, Marc Dupontavice of Xilam Animation, Carlos Biern of BRB International, Paul Young of Cartoon Salon and chaired by Christophe Erbes, then discussed the findings and the general challenges and opportunities for the industry. Luca Milano thanked the Commission and the Observatory for this new report which he described as a "tool for developing new strategy." Carlos Biern stated that the animation industry needed to "think globally". Lucia Recalde explained that the Focus on animation study is "aimed at looking holistically at the entire industry." She added that "with regard to creative talent ... It's not just about supporting this talent but also to retain this talent in Europe."

Focus on Animation is the starting point of future research to be done on the television and on-demand markets. Executive Director of the Observatory, Susanne Nikoltchev, emphasised that the energy and interest created by this first publication would be continued by the Strasbourg based Observatory. She explained that "the Observatory was ideally placed with its knowledge and experience and mandate for this project to continue further research and publications on the animation industry in Europe." Unfortunately there is much less data available on these markets in comparison to that for film, in particular regarding production volumes. A European snapshot of children's television channels is provided (see below) along with an analysis of the origin of animation content on a sample of important players. The analysis shows that broadly speaking European children's channels have a higher proportion of European animation content than their EU-based US affiliate counterparts. There are some exceptions to this finding illustrated in the report, where the US brands are clearly more engaged in local content in some countries than in others.

Regarding television and on-demand services (where a new battle-ground is developing in the acquisition of content and the provision of services for kids) both will be examined more extensively in the next months of research on the project. 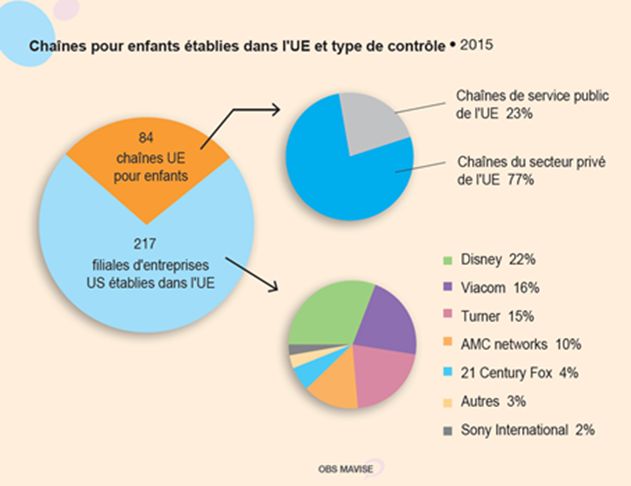