A Profile of Current and Future Audiovisual Audience

20/01/2014 - One of the main objectives of Creative Europe is to develop new audiences for European films. In order to find out more about these audiences, a study on audience behaviour has been carried out

A study on European cinema audience behaviour has been released by the European Commission. The survey was completed by 4,608 respondents aged between 4 and 50, from 10 European countries.

The first finding is that 68% of the respondents declared that they download films from the internet for free, and 56% watch them on free streaming websites. VOD subscriptions and pay-per-view are slightly less popular and account for 54%. The high cost of cinema tickets or legal platforms seems to be a key motivation for free downloading and streaming, especially in countries like France, Spain and Croatia; while in other countries like Romania and Poland, it looks as if the lack of availability is the main reason. In this sense, a common complaint was the paucity of dubbing and/or subtitling of foreign films in the mother tongue or second language (62% of film watchers agreed on this point).

In spite of the complaint about the cost of cinema tickets, Europeans are still avid cinemagoers, and 87% of the respondents declared that they watched films in cinemas (a percentage which is a good deal lower for Romania, where only 71% of film viewers are actually cinemagoers).

One of the main purposes of this survey was to split the European audience into groups, in order to gain a better understanding of the trends and behaviours that characterise European film consumers. Five profiles of film watchers have been identified: 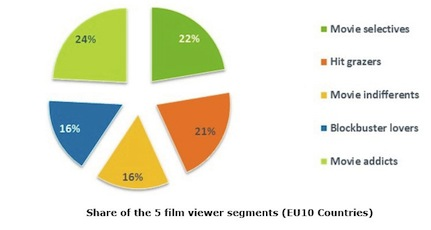 The identification of film-watcher profiles should allow the creation of focused marketing strategies depending on the profile being targeted. For movie addicts, for instance, enhancing the availability of both big European productions and art-house movies as VOD could be a good strategy, while for selective watchers one may prefer to emphasise the diversity of European cinema through rich databases that allow easy access to trailers. Trailers have proven to be the most widely used method of gaining a general idea of a movie, meaning that the internet remains the most common channel used to acquire information on films, especially since cinema-related activities are now quite widespread on social media. Even though word-of-mouth by family or friends is still a very strong selection criterion, advice found on social media is gaining ground.

Among the marketing initiatives to support European movie production suggested by the respondents, the following suggestions were made: a week of European cinema in theatres across the continent; stronger promotion of European films on TV; increased visibility for the European Film Awards; and detailed online databases of European cinemas.

The most highly acclaimed genres were animation, family entertainment and action movies. The main weaknesses that were pointed out were language barriers and low-budget quality, in addition to failures in distribution and promotion activities.

The survey can be found here.