The European audiovisual groups lost 5.3% of their global market share

The European Audiovisual Observatory has just published the 20th edition of its Yearbook.

This reference publication contains pan-European figures (on 40 countries) on the various branches of the sector. Using the different indicators available, the Observatory reveals that the entire audiovisual sector experienced a second year of stagnation in 2013. For the third year running, the market generated revenues in the order of EUR 133 billion, with even, for the first time, a very slight fall in its revenues in 2013 (-0.1%). The sector most affected is physical video (-11.3%), but 2013 was also a year of recession for cinema receipts (-4.3%), video games (-1.8%) and broadcasting services (-0.5%). The growth in the activities of pay-TV platforms (+2.7%) and in the production of online VoD services (+46.1%) was unable to compensate for the decline in the other activities. 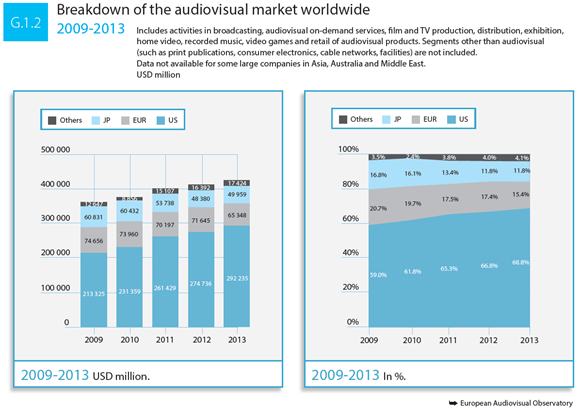 The stagnation of the European market and the fact that the two growth areas are mainly controlled by American groups means the European groups lost 2% of their global market share between 2012 and 2013 and a total of 5.3% between 2009 and 2013. 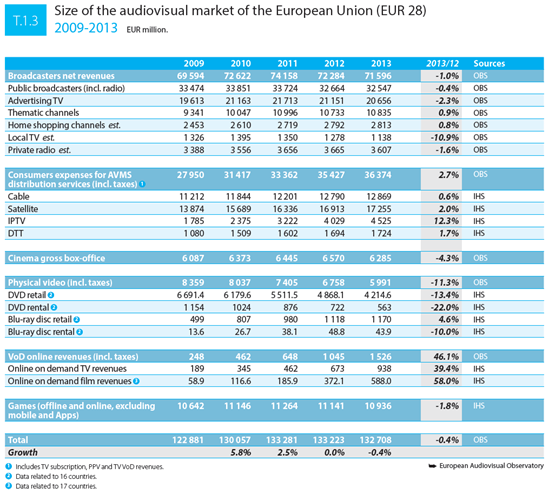 This year, this reference publication contains a significant innovation in the form of an analysis of the revenues generated in the European Union by the European subsidiaries of international groups. At the current point in time when the negotiations on the TTIP (Transatlantic Trade and Investment Partnership) are due to resume, it is worth attempting to produce more precise figures on some aspects of international trade in the area of audiovisual services. The Observatory has implemented a methodological approach proposed by the WTO, namely an analysis of FATS (Foreign Affiliates Statistics), which focuses on the various branches of the audiovisual sector: production, post-production, distribution, film exhibition, recorded music, radio, television, specialised retailing, videogram rentals, video games, on-demand audiovisual services and distribution platforms for audiovisual services. The satisfactory figures available for the analysis relate to the period 2008-2012 but suffice to illustrate the extremely rapid developments. 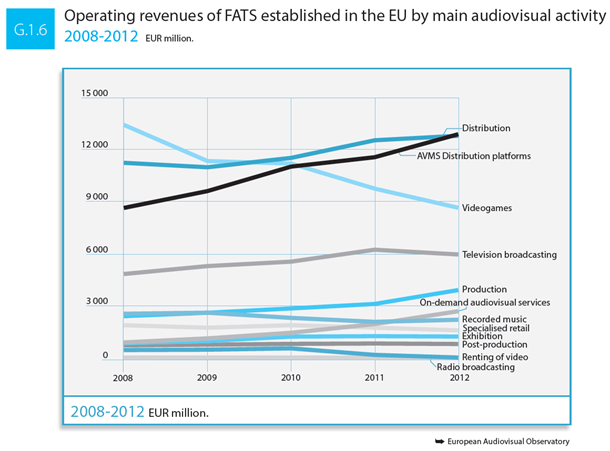 · In 2012, the activities of distributors of audiovisual services (cable, satellite platforms) became the primary source of revenues of the subsidiaries of foreign groups in the European Union. At EUR 12.9 billion, the figure is slightly higher than for the more customary ways of distributing audiovisual programmes (EUR 12.8 billion).

Unfortunately, no data are available on the revenues of subsidiaries of foreign groups in the European Union (especially the United States).