On the occasion of the 65th Berlin International Film Festival the European Audiovisual Observatory releases its first estimates for European cinema attendance in 2014. The Observatory estimates that total admissions in the European Union increased marginally by 0.6% to 911 million tickets sold, around 5.4 million more than in 2013 (906 million). The small increase was primarily ensured by a strong year-on-year performance in France and Spain which kept EU admissions from continuing their downward trend of recent years.

As in 2013, two thirds of EU markets experienced a decline in cinema attendance, while admission levels increased in only nine out of the 27 EU territories for which provisional data were available. The year-on-year increase was most pronounced in France (+14.8 million, +7.7%) and Spain (+10.5 million, +13.6%) with cinema attendance in both markets recovering from exceptionally weak results in 2013. French admissions growth was driven by the success of national films, which reached their highest admission levels in 30 years. For Spain the increase in cinema attendance to 87.4 million marks the temporary end of a long downward trend with admissions hitting a record low of 77 million in 2013. Apart from France and Spain, year-on-year growth in cinema attendance was only achieved in six Central and Eastern European member states, led by Poland (+11.2%), the Slovak Republic (+10.8%), Romania (+10.5%), Hungary (+8.4%) and the Czech Republic (+4.5%) as well as Belgium (+0.8%). The most significant drops in admissions were registered in Germany (-8 million; -6.1%), the UK (-8 million; -4.9%) and Italy (-6.5 million; -6.1%).

Outside of the EU, the Russian Federation confirmed its position as the second largest European market in terms of admissions with 175 million tickets sold, a 1% decrease on 2013. While growth in Russian cinema attendance seems to have levelled out, Turkey continued its impressive growth trend of recent years with admissions jumping to 61.4 million, up 22% from 2013 and the highest level in the past few decades.

Cinema attendance in the European Union 2005-2014 provisional
In millions, estimated; calculated on a pro-forma basis for the 28 EU member states

National & US market shares
The market share of national films tends to fluctuate depending on the success of generally a few local blockbusters. National market shares increased in 16 and declined in eight EU markets for which data were available. Boosted by the success of local blockbusters Qu’est-ce qu’on a fait au Bon Dieu, Supercondriaque and Lucy – all of which sold more than five million tickets - France registered an impressive increase in its national market share which jumped from 33.8% in to 44%, making France once more the EU market with the highest national market share. But national films also performed well elsewhere in the EU, winning a market share of above 20% in 10 other EU markets including Italy (27.8%), Finland (27.5%), Denmark (27%), Poland (27.1%), Denmark (27.3%), Germany (26.7%), the UK (26%) or Spain (25.5%). Looking outside of the EU, Turkey remained the leading European country in terms of national market share with Turkish films taking a record share of 59% of total admissions in 2014, a level unparalleled in any other European market in the past few decades.

US market share on the other hand declined in 12 out of the 14 EU markets for which provisional data were available with the average US market share in these markets dropping from 70% to 63%. 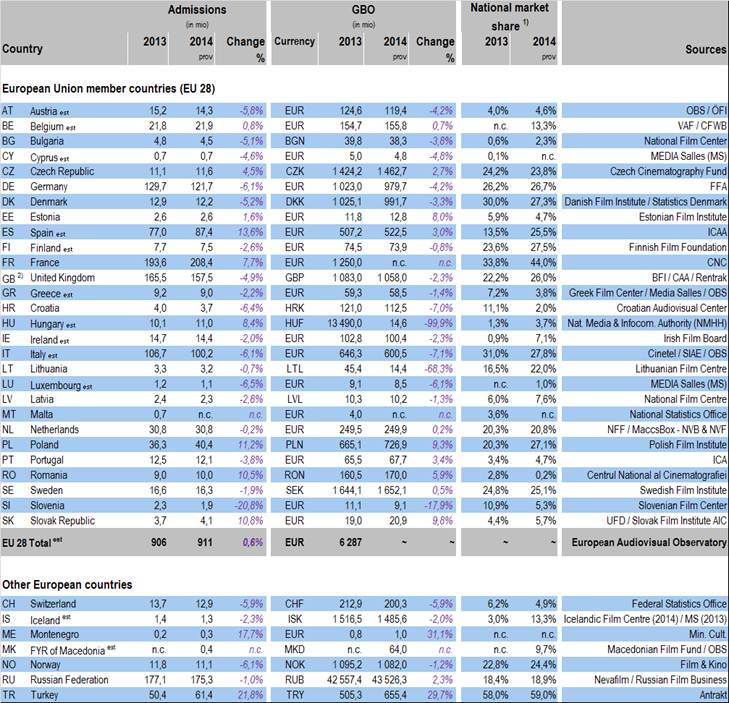 1) Based on admissions except for BG, GB, IE, IS and RU. Includes minority co-productions with the exception of CH, FI, NO and SE.
2) National market share based on GBO in the UK and Ireland up to and including 18 January 2015.