The formula for green success

“We went to each and every department”, reports Herbig. “The fantastic thing about it was that all of them participated.” Art Direction, for example, used biodegradable paints and sourced their material from local suppliers. “I addressed the issue of sustainability nine months before we began principal photography”, the director explains. “What people call green filmmaking already exists in the U.S., France, and England. Here, the concept is practically treated as an afterthought.” When the director took his project to Hamburg, he was pleasantly surprised to find that the Film Commission Hamburg Schleswig-Holstein (FCHSH) offers a Green Shooting Card as well as a Best Practice Guide from which the Buddy production benefitted. 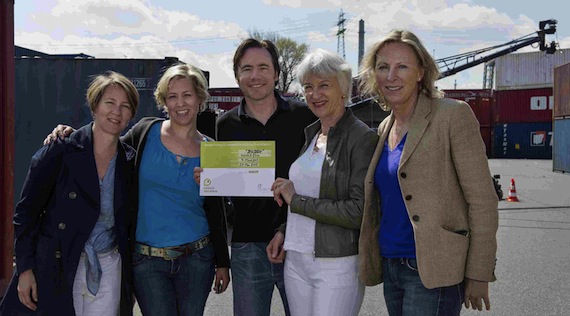 Herbig hired Nicola Knoch, a sustainability consultant, to create awareness of environmental issues among crew members. Nicola got involved right at the start with Buddy’s production planning in order to break old habits and introduce sustainable procedures in the production process. A “Green Hour” was scheduled into the production’s regular work week for ongoing discussions. He called upon the Art Direction and Property departments to use ecologically safe material and to procure sustainable products.

About 50% of the ingredients the catering crew used to prepare over 11,000 meals were regionally sourced. The use of paper/plastic plates was virtually eliminated. “We gave everyone presents at the pre-shoot warm-up instead of at the farewell party”, confirms Herbig. “Every team member got a sustainably produced bag containing a Dopper water flask and a small thermos. Through this measure alone, we generated 65% less waste during production as compared to non-green productions.”

CO2OL A, a consulting company specializing in climate protection, developed a calculator that was used to determine the carbon footprint left by the Buddy production.The result: emissions were reduced to less than 400 t. Most of the carbon emissions (150t) were generated by over 2,000 overnight stays by the large crew that could not be accommodated at a green-powered organic hotel. Production vehicles accounted for 112 t, while flights and 400,000 km of road travel generated 66 t of CO2.

FFHSH's Best Practice Guide proved to be indispensable during the implementation of the sustainability measures. “In the future, it would be beneficial to link subsidies to sustainability measures and to give productions an incentive to think along these lines and opt for the — initially, at least — more labor-intensive path", suggests Knoch. "Sustainability involves more work and it’s more expensive at first", adds Michael Bully Herbig. "That's why everyone has to be creative."