The German broadcaster Nordddeutsche Rundfunk (NDR) is modernizing its TV studios with energy efficient LED backlight lamps from Cologne-based Lightequip, which use nearly half as much power as traditional fluorescents. Since 2014, the main studio in the NDR backlot, where live broadcasts such as NDR’s Talkshow or extra 3 are produced, has been reaping the benefits of this investment. 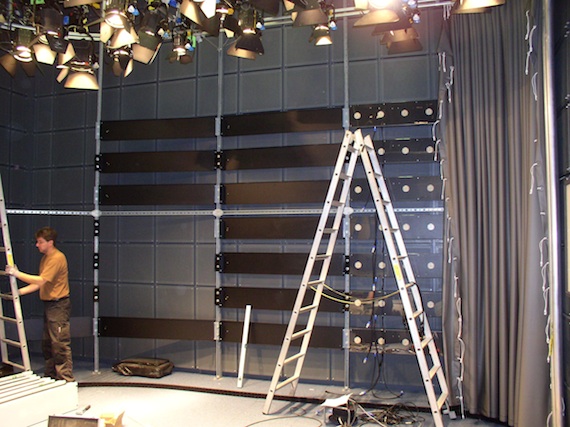 ‘Energy saving is an important issue’, emphasizes Jörg Droschinski, Head of Lighting Engineering at NDR, who has a decade’s worth of experience with the use of LEDs in broadcasting operations. ‘It wouldn’t have made any sense to replace our twenty-year-old fluorescent lights with new ones when we were modernizing our huge studio.’ Instead, the broadcaster decided to use an LED-based backlighting system to provide homogenous studio lighting. ‘This is an investment that pays off not only in decoration, color reproduction, control, and control speed but also in energy consumption.’

In NDR’s studio, 260 old fluorescent backlights are being replaced by 262 LED backlights that are fixed behind a diffusion cyclorama. Thanks to the standard RGBW features, it is possible to produce saturated colors in red, green, blue, neutral white, and mixed colors. „The artificial horizon can be shaped and colored”, explains the lightening expert. Since this system creates homogenous backlighting for large spaces, it also can be used for BlueBox and green screen shots.

‘Besides providing factorially higher energy efficiency, the LED technique also delivers more options for studio design“, says Michael Kriwet, Head of Technical Department at the Cologne-based Kölner Lightequip, which developed the LedCyc6 in cooperation with the manufacturer LDDE in Vienna after NDR submitted its technical requirements. In 2008, when NDR planned to modernize its small studio in Hamburg, the broadcaster was looking for a replacement model with exactly the same casing as the old fluorescent lights had, so that it would not be necessary to alter the studio infrastructure. LedCyc6 was developed and released in the market as a perfect turnkey solution after a series of successful tests proved its suitability and dependability for broadcast use.

This reliable system was once again selected to modernize the 800-square-meter Studio 3. The energy savings are enormous. The fluorescent lighting, running at full capacity, consumes about 60,000 kWh/ year, while the LED lighting, also running at full capacity, consumes only 36,000 kWh/year. ‘This is a clear step towards sustainable broadcast production’, sums up Lightequip CEO Gustav Schwaupa, whose suggestion to broadcasters is: ‘Come around and broaden your horizons’!