The European Audiovisual Observatory has just published a summary report on the broadcasting of fiction by a sample of television channels in Europe between 2006 and 2013. By “fiction programmes” we understand five easily identifiable formats: films produced for television (TV films), series and soap operas, animation (excluding feature-length animated films), feature-length cinema films (including animated films) and short films.

The proportion of fiction

The proportion of fiction in the programming of television channels has fallen slightly over the years. For the 13 countries analysed since 2006, the total proportion has fallen from 53.1% of programming time in 2006 to 50.5%. The inclusion of Luxembourg and Spain from 2006 has resulted in a slight decrease (51.3% in 2007, 48.8% in 2013). For the 17 countries analysed in 2013 (including Poland and Portugal), the proportion is 48%. The slight improvement discernible in the period 2006-2013 results more from the increase in the broadcasting of national fiction rather than from a substantial rise in the number of works across Europe.

The proportion of fiction varies according to the channel genre. Logically, the position of fiction is particularly significant in the programming of channels that mainly show films: in 2013, for the 17 film channels analysed 91.7% of airtime was devoted to fiction programmes, 80% of these being films. The second category with the most fiction consists of children’s and youth channels, where fiction made up 80.4% of the programming time of the 12 channels analysed in 2013, with 51.3% of the total occupied by animation. The 32 entertainment channels analysed devoted 53.6% of their airtime in 2013 to fiction, including 34% for series. As far as general-interest channels are concerned, the proportion of fiction is significantly higher for the commercial channels (38.9% of their airtime in 2013, including 23.2% for series) than for the public service channels (27.5%, including 15.6% for series). Cultural or educational channels devote much less airtime to fiction (17.2% in 2013, including 8.4% for films), but it will be noted that they are the only channels to make an effort to show short films (1% of their programming compared with 0 or 0.1% for the other channel categories).

The analysis of the origin of fiction programmes shows that the situation varies considerably according to the type of channel and the channel’s country of reception.

Only two categories of channel have more than 50% of European fiction in their programme schedules. Cultural and educational channels (those that broadcast the least amount of fiction) mainly offer European works (78.3% of the programme schedule time in 2013, of which just under one-third consisted of national programmes and two-thirds were imported or were co-productions). The proportion of the programme schedule time devoted to European fiction broadcast by the public service general-interest channels was 57.6% in 2013 and a majority of these were non-national works.

All the other channel categories have programme schedules that devote less than 50% of their airtime to European fiction. Overall, children’s and youth channels schedule 43.1% of their airtime for European fiction. This proportion, which is nevertheless relatively high, is reached thanks to the proportion of European animated works. Commercial general-interest channels and film channels offer a fairly similar proportion of European works (35.1 and 37.5% respectively in 2013), but the proportion of national works is higher in the schedules of the commercial general-interest channels.

Not surprisingly, the principal origin of non-European fiction works, in all categories, is the United States.

The impact of transfrontier distribution 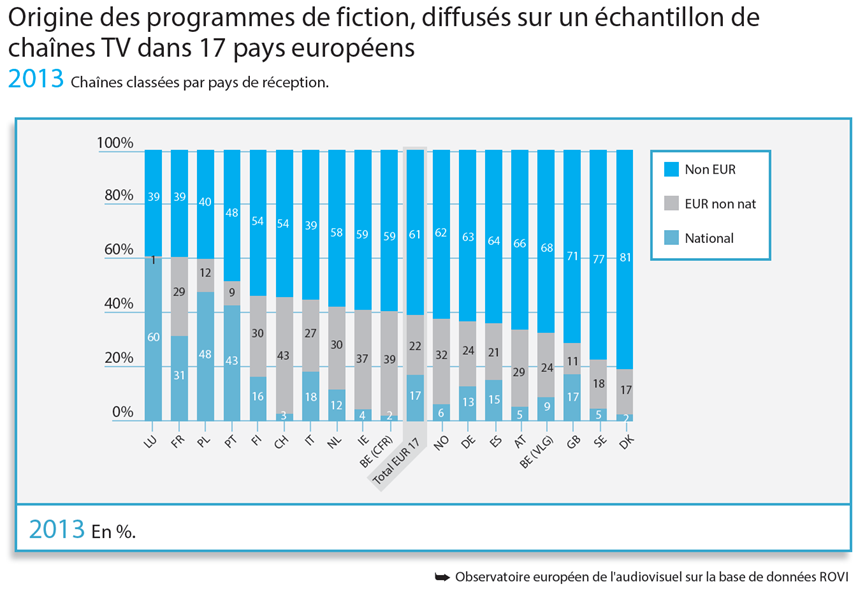 The data relating to Denmark and Sweden, as well as the French Community of Belgium and the Netherlands, are significantly affected by the presence in the sample of channels that target these respective markets, but are established in other countries (United Kingdom for the Nordic countries, Luxembourg for the French Community of Belgium and France). These “delocalised” channels offer a significantly lower proportion of European programmes. For example, the proportion of European works offered by the channels established in the United Kingdom and targeting the Nordic countries is less than 6% of their airtime devoted to fiction. 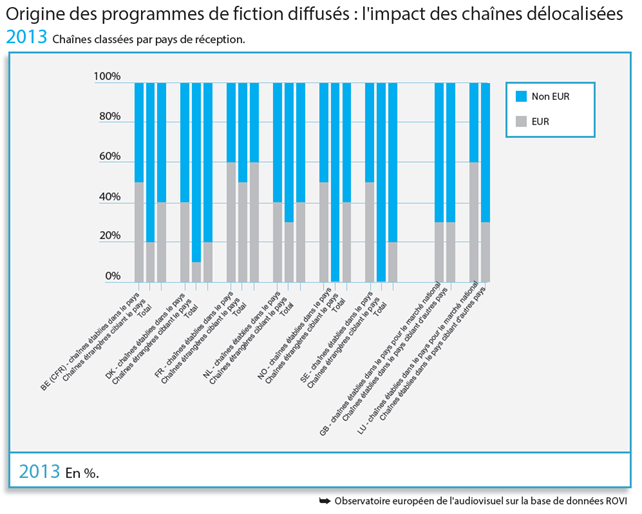