Nisi Masa in a few words

Nisi Masa is a network of associations comprising 31 members based in 28 countries all over Europe. Nisi Masa’s main goal is to organise workshops and share know-how, bring people together, and bridge the gap between film students and film professionals.

Nisi Masa is composed of four departments: the Network Department, which aims to build bridges between associations, allow people to collaborate and make European connections stronger; the Film Department, which organises film workshops such as Kino Kabaret, Cinetrain and Cine-Boat, where people spend a few weeks together and make documentaries; the Debates Department, which focuses on film criticism; and the Script Department, dedicated to scriptwriting. The biggest project in the framework of the script activities is the European Short Pitch.

The eighth edition of the Nisi Masa European Short Pitch (ESP) took place in Luxembourg from 1-2 March. The event is funded by the MEDIA Programme and Film Fund Luxembourg, in collaboration with Visegrad Film Forum, the Film and Television Faculty of the Academy of Performing Arts in Bratislava, Filmreakter and Discovery Zone – Luxembourg City Film Festival.

Every year, the ESP gives 25 young European filmmakers the chance to pitch their short-film projects – which are at the pre-production stage – to a pool of professionals from all over Europe. This year, 53 professionals, mostly film producers, attended the event.

The participants first met in Bratislava at the beginning of January for the Scriptwriting Workshop. This was led by five tutors: French producer Marie Dubas, script consultant and film programmer Nadja Dumouchel, Italian director Fabio Grassadonia, Romanian screenwriter Razvan Radulescu and writer Leonardo Staglianò. Tutors and participants worked together on the scripts and started practicing the pitches. Two months later, the filmmakers presented their projects to producers at the Auditorium Cité in Luxembourg via a seven-minute pitch.

To warm up the participants, on 28 February, all guests were invited to attend a round-table discussion about ESP projects from previous years that became successful co-productions. The event was moderated by producer Bernard Michaux with the participation of Norbert Laporte, from Film Fund Luxembourg.

The Night of All Things – Palomero Delgado Pilar (Spain)

On Saturday 1 March, the 25 participants took to the stage to present their projects. Over seven minutes, the filmmakers had the chance to tell their story, show pictures, trailers and clips, and explain the intentions and motivation behind their projects. Brief notes about the production aspects and the predicted budget completed the presentations. After each pitch, the audience had the opportunity to ask a few questions to find out more about the projects, or gave suggestions as to unconvincing aspects of the presentation or the project itself. The time allowed for questions was usually no longer than ten minutes, as the morning of the second day of the event was dedicated to one-to-one meetings between participants and producers.

Once the pitching session had closed, the producers had the opportunity to vote for their three favourite projects and schedule one-to-one meetings with filmmakers for the day after.

In the afternoon, all participants were able to attend a masterclass given by Belgian director and scriptwriter Luc Dardenne, organised as part of the Discovery Zone programme at the Cinématheque.

After the masterclass, the participants headed back to the Auditorium to take part in the awards ceremony. 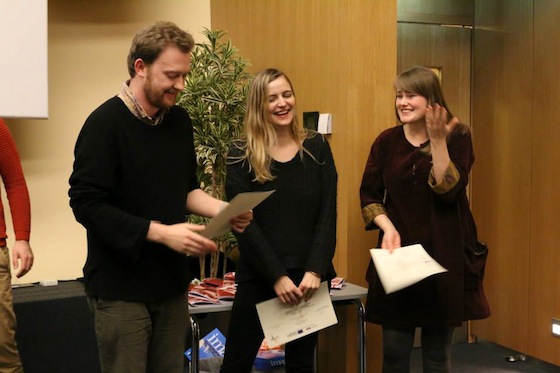 Anna, 32, has a sad sex life. She lives on an island with her son and her husband Matti. She works at the island's gas station fixing engines. Anna is disturbingly efficient household keeper, whereas Matti is less practical and interested in ancient cultures. Anna is obsessed with having sheep for the summer but it is only their nanny who is able to see that she actually needs to have sex.

Anna's colleague, Sami, 22, slaps her ass and is begging her to come to his party. She's tempted and first tries to make love with Matti. Sex isn't easy for a control freak and she blames him for not being masculine enough.

Seventy five year old Vera and her hundred-year-old mother Nada live in a squeaky old flat in Zagreb. vera takes care of her ancient mother and the two engage in a series of constant power struggle that involve staring contests, pinching, little slaps and vehement refusal to eat banana mush.

One evening, after a particular nasty fight, a bat flies into Nada's room and starts hibernating underneath her bed. The next morning Vera finds her mother slightly altered. Her usual mumbling replaced by short simple sentences she manages to bully her daughter into placing a basin of water underneath the bat in order to keep him hydrated and alive.

Slowly, much of her horror, Vera realizes that the longer the bat is there the stronger her mother gets. nada's personality, previously subdued by old age, begins to restore itself as she starts to take control of her daughter's life. It downs on Vera that if she kills the bat she kills her mother and if the two beasts push her hard enough she might do just that.

What ensues is an epic battle of wit and face kicks that will determine who lives and who dies.

his lans are thwarted when his parents buy him a bike for his birthday, not a Ford Mondeo. Unperturbed, he sets out on two wheels, alone, to fulfill his sexual destiny.

Over the course of a few evening, spent in a car park somewhere near the North Circular, he finds first love, discovers rather more about his parents' sex life than he ever wanted to, and learns that the innocence of youth is something to be treasured above growing up too quickly. But things don't and badly for Andy, as he finally realizes that what he wanted all along was waiting right in front of him... 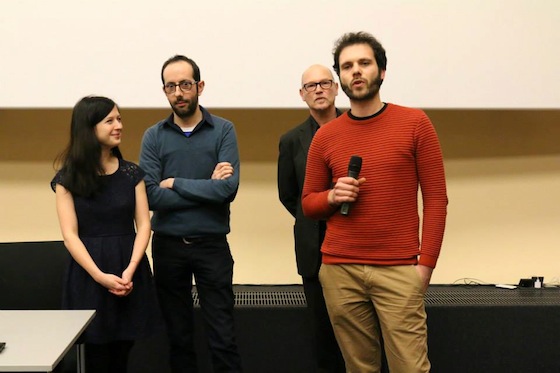 The friendly atmosphere and the organisers’ and tutors’ professionalism are invaluable to the ESP's success. There are myriad networking possibilities, from breakfast each morning to the late-evening events. The high number of one-to-one meetings that took place on the second day reflects the consistency of the selected projects and the important opportunities this event creates to build new partnerships and artistic relationships.

Some participants shared their thoughts on the European Short Pitch. Their statements prove how such an event is useful for young filmmakers who are eager to improve their scriptwriting and communicative skills, and to widen their networks.

"This is my first workshop and I was pleasantly surprised – the scriptwriting practice in Bratislava was very intense, informative and helpful. The ESP tutors were so professional and the participants so smart and open-minded that it was a great pleasure to share ideas and knowledge with each other. My project developed a great deal during the work thanks to all of them. I started "seeing" my scenes, the spaces where the action takes place, the details, and before that I couldn't even imagine the places. Moreover, ESP pitching in Luxembourg was my first pitching ever. So I have had a great, valuable experience at ESP. It was a very deep study process and one of very high quality." Nadiya Koval, director of The Visit.

"The day after pitching our animation, D.O.G., we were pleasantly surprised to find out we had meetings with potential co-producers from all around Europe. This was exactly what we wanted, to get in touch with genuinely interested people who would like to work with us. The producers we met are helping us to connect with animators, composers, illustrators and more from their individual countries. The contacts we made during the ESP are proving to be essential for the further development of our short animation. In short, it is definitely worth the effort!" Marijana Verhoef, director of D.O.G.

"To be honest, the experience has changed me. One specific result is that I stopped biting my fingernails! After the Bratislava meeting, I came home and felt like a winner. I'm at my best when working intensively with people, all day long. I love stories, and being able to somehow be part of so many different kinds of worlds felt amazing. There I also understood that the way I am, and the way I write, is something that people are interested in. What could be better for a storyteller? So, after coming home feeling like a winner, naturally that glory disappeared soon after I started to write alone in my room. I had many Skype sessions with my tutor Leonardo Staglianò, and he really made me write and rewrite and think and rethink, and then write again. It was tough, but once again, it was the best way to work with me. Winning the Best Pitch in Luxembourg proved that. I shouldn't stop believing in myself, ever." Vilja Autiokyrö, director of Motor Oil.

"The European Short Pitch 2014 involved spending a week and a half in two countries with a gang of twenty-four extremely talented and creatively diverse filmmakers and a group of fantastic tutors. Our tutor, Leo Stagliano was a brilliant mind (and writer in his own right) who saw straight through to the core of issues in our scripts and helped us to develop them even further into something to be proud of. The entire experience was intense, wonderful, passionate, moving, funny, tiring, educational, exciting, enlightening but most of all, inspiring. My short film now feels ready to move on to production and I feel even closer to being able to make my first feature." Ben Gutteridge, director of Away Break.

Between successful achievements and new projects

Cineuropa met up with Wim Vanacker, the head of the Script Department, who is very satisfied with how the ESP has evolved over the years. "We have had somewhere around 200 selected projects during these eight years. In the first editions, 25% of the selected projects managed to be effectively completed and shown at festivals; now, it’s 70%."

The ESP call is launched from May until September. Once the submission period is closed, 20 people from the network read the scripts and make the selection. "This is also one of the strengths of Nisi Masa," continued Vanacker. "Such a wide network of people allows us to have different perspectives on judging and selecting the projects. The main criterion is, of course, the quality of the script."

According to Vanacker, this year there wasn’t any recurring theme, unlike in previous years. In 2012, for example, there was a major presence of films focusing on childhood, while 2013 was the year of the family dramas. This year there was a mix of themes and a general trend towards the drama genre. It is interesting to note that there were only a few comedies, and three of them won the prizes.

Vanacker and his team are working on a couple of new projects. The first one is a workshop for scriptwriters, giving them the chance to work on their scripts together with actors. The event, called Acting Out, will be organised in collaboration with the Italian Lago Film Festival. The second project is a pitch for works in progress, in order to help directors deal with post-production issues, find a distributor or get a sales agent.

For more information about Nisi Masa and its activities, visit the website.