Ignacio Carrillo travelled all his life throughout the villages and regions of northern Colombia, carrying music and traditional songs on his accordion, a legendary instrument that is said to be cursed, because it once belonged to the devil. As he became older, he got married and settled with his wife in a small town, leaving his nomadic life behind. When she suddenly dies, he decides to make one last journey to the Northern edge of the country, to return the accordion to the man who gave it to him, his teacher and mentor, so he will never play it again. On the way, he is joined by Fermín, a teenager who dreams of becoming a “juglar” like Ignacio, and to travel all around playing the accordion like he did. Tired of his loneliness, Ignacio accepts to be accompanied, and together they start the journey from Majagual, Sucre, to Taroa, beyond the Guajira desert, finding on the way the enormous diversity of the Caribbean culture and surviving all kinds of adventures. Ignacio will try to convince Fermín to take a different path in his life, having learned that his only led to solitude and sadness, but he will have to face the fact that destiny has different plans for him and his pupil.

more about: The Wind Journeys

Two UK titles and the Colombian drama The Wind Journeys (co-produced by Germany and the Netherlands) are opening today against Hollywood blockbuster Sex and the City 2 (Sandrew Metronome) and US...

This is Love to compete at San Sebastian

A total of eleven German (co)productions will screen at the 57th San Sebastian Film Festival, to be held this year from September 18-26. Matthias Glasner’s This is Love (Badlands Filmproduktion)... 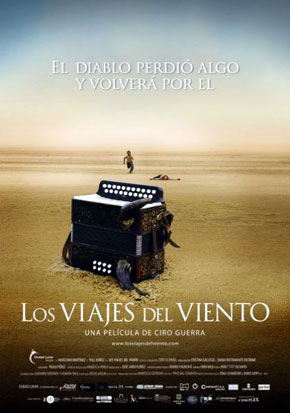