It is Christmas Eve in Santiago de Chile. Three teenagers with different problems at home end up spending the holiday together. Alejandro is 17 and comes from a working class family. He is Aurora's boyfriend, an upper class 18 years old girl as beautiful as she is confused. That day, he decided to join her in the search of objects and mementoes from her dead father's house before it is occupied by the new owners. In this place, at the foot of the Andean mountains in the outskirts of Santiago, the crisis they are living as a couple explodes. When the situation seems to reach a dead end something unexpected occurs: they find an intruder in the house. A vulnerable girl, Alicia is only 16. She had run away and sought refuge in the abandoned house of Aurora's father During the process of taking care of her, they gradually find an exit to their own impasse. Alejandro and Aurora start to feel a growing fascination for the enigmatic Alicia, who increasingly becomes the personification of their desire. It is a night of initiation and loss of innocence after which they will begin to take the control of their own lives.

An unusual evening in Navidad

After the little girl taken in by travelling performers in La Pivellina and the French title The Wolberg Family, the Cannes Directors’ Fortnight continues to explore the theme of family, through...

This Wednesday, European films dominate the line-up with eight productions and co-productions among the ten new releases hitting screens. Leading the contingent is 87-year-old director Alain... 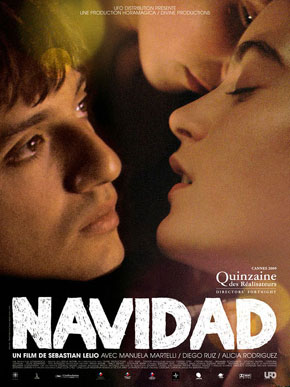