Lars leaves the army and joins a group of neo-Nazis, which organises ruthless raids against Arabs and homosexuals. Apprenticeship to the 'brotherhood' is tough and Lars is supported by Jimmy, who acts as his mentor, charged with testing his trustworthiness and the preparation of fundamentalist far right texts in the style of 'Mein Kampf'. Unforeseeably, a passionate affair ensues between the two men. A love lived in secret, until the group's racist and violent rules end up forcing the pair to face the inevitable quandary: to betray their ideological 'brothers' or betray their lover other and their own feelings. Whatever the choice, it will lead to violence one way or another, whether physical or mental.

A remarkable Danish debut feature which won the top award at the Rome Film Festival 2009. Brilliant directing for a thwarted homosexual love-story set in the Neo-Nazi underworld

“I don’t know how to be a director”

Danish film rookie Nicolo Donato may be modest about his directorial talents, but his assured debut won the top prize at the Rome Film Festival

Danish, Swedish and Norwegian film projects from Denmark’s Per Holst

Kalev strands Casta on The Island 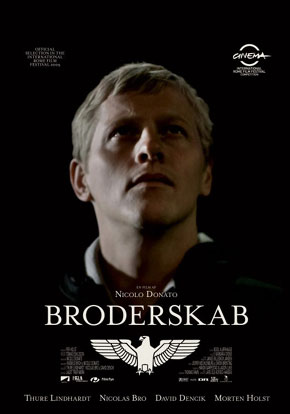 70% of cross-border TV channels fall under the AVSMD jurisdiction of the Netherlands, Luxembourg and Spain