Every day Stavros raises the metal shutters of his cigarette store, puts out the newspapers in front and then sets out the chairs where he and his friends sit all day, looking out on the dusty intersection and surrounding grey buildings that shelter their businesses. They’re all very proud of the way their dog Patriot, on the opposite pavement, barks at every passing Albanian. Stavros and his friends don’t like these foreigners even if they’re willing to do the jobs the Greeks won’t do, nor do they like the recently arrived Chinese. By the store’s entrance, Stavros’ increasingly senile mother mopes in an armchair, regardless of the affectionate care lavished on her by her devoted son. Then one day she suddenly falls upon an Albanian worker, embracing him and calling him «my son» in Albanian. In fact, what does Stavros really know about his parents? His mother has always told him that after his father died up north, she moved to Athens, when he was but a year old. Now Stavros’ pals start looking askance at him: is he Greek or Albanian? Does he really have the right to sing the racist little ditty: «Albanian, Albanian, you’ll never become a Greek…».

Social commentary and heartwarming specificity are what make Filippos Tsitos’ (LUX Prize competition 2010) bittersweet dramedy as a example of one of Greece’s finest inventions: satire

Interview with Filippos Tsitos, the director of Plato's Academy, one of the three finalists for the LUX Prize 2010

“For the Greeks, disorientation is a national disease”

Interview with the producer of Plato's Academy after its pre-selection for the European Parliament’s LUX Prize. Moriatis explains why he thinks the film is interesting and expresses his opinion...

Fred at School – a conference on film literacy 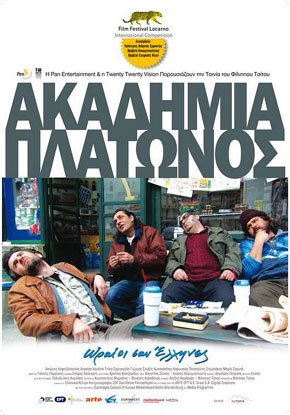