The First Lebanon War, June, 1982. A lone tank and a platoon of paratroopers are dispatched to search a hostile town that has been bombarded by the Israeli Air Force. The mission gets out of control and turns into a death trap. Night falls and the wounded troops remain trapped in the center of a town in ruins, unable to communicate with the central command and surrounded by Syrian commandos closing in on all sides. Shmulik the gunner, Assi the commander, Herzl the loader and Yigal the driver, are four 20 year old boys, operating a killing machine. They are not courageous war heroes, eager for battle or self-sacrifice. All they have is a terrible fear of death.

War seen from a tank in Lebanon

The deafening clangour of the cannon rotating in search of a target, the gunsight lens that changes and turns into our eye staring at death and "enemies" like silent silhouettes to be shot down in...

“The foxtrot is the dance of a man with his fate”

VENICE 2017: Cineuropa spoke to Israeli director Samuel Maoz about the origins and themes of his new effort, Foxtrot

Foxtrot: Square dances in round holes 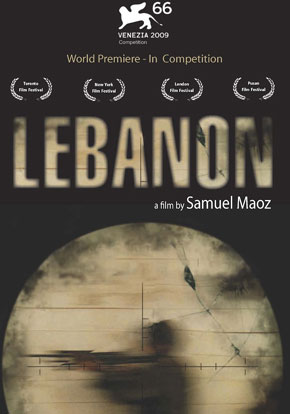