THE MAN WHO WILL COME

Winter, 1943. Martina, the only child of a poor farming family, is eight-years-old and lives on the slopes of Monte Sole. Years earlier her little brother died when just a few days old and since then she has stopped talking. Her mother becomes pregnant again and Martina waits for the baby that will be born, while the war slowly draws nearer and life becomes increasingly difficult, squeezed between commander Lupo's partisan brigades and the advancing Nazis. The baby boy is finally born on the night between September 28 and 29, 1944. Almost at the same time the S.S. carry out an unprecedented roundup in the area, which will go down in history as the Marzabotto massacre.

more about: The Man Who Will Come

The Man Who Will Come

"It was a massacre of innocents"

After his feature debut The Wind Blows Round, which benefited from unexpected word of mouth, Giorgio Diritti returns with an ambitious second film

The new film by the director of The Man Who Will Come tells the story of Antonio Ligabue and is due to star Elio Germano. A Palomar production

There Will Come a Day

“Looking at reality in a different way”

White Pictures enters the arena with The Man Who Will Come

Elle Driver to attend Sundance with There Will Come A Day

Germany and Switzerland welcome Italian Cinema from September to December 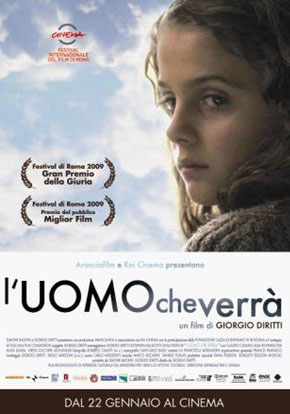