The story of the Michelucci family, from the nineteen-seventies to the present day: the central character is the stunningly beautiful Anna, the lively, frivolous and sometimes embarrassing mother of Bruno and Valeria. Everything begins in the Summer of 1971, at the annual Summer beauty pageant held at Livorno’s most popular bathing establishment. Anna is unexpectedly crowned “Most Beautiful Mother”, unwittingly stirring the violent jealousy of her husband. From then on, chaos strikes the family and for Anna, Bruno and his sister Valeria, it is the start of an adventure that will only end thirty years later. Bruno ends up living in Milan after managing to escape from Livorno and his mother. He will return to his hometown at the end of the film to be at his mother’s side during her very last days.

more about: The First Beautiful Thing

It takes Bruno just one look at his terminally ill mother Anna to be flooded by memories. Back to 38 years ago, to the summer of 1971, when Anna was crowned "the most beautiful mother” of the most...

The new film by the director of Belli di papà is a remake of a successful Argentinian comedy, starring Fabio De Luigi and Micaela Ramazzotti; it being staged by Colorado together with Medusa

Escaping life with The Leisure Seeker

The directorial debut of the actor who recently won a David de Donatello for Fiore has been shot over six weeks between Nettuno and Rome. It has been produced by Kimerafilm with Rai Cinema

Cristina Comencini’s new film centres around a strange pair of friends involved in a relationship with a boy who’s a lot younger than them: an ode to levity

Paolo Virzì and Marco Bellocchio to hit the set in May 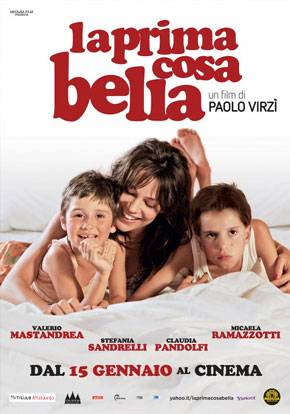