The setting is Algiers in the 1920s. Rabbi Sfar lives with his daughter Zlabya, a noisy parrot and a mischievous cat who devours the parrot and starts talking, but only tells lies. The rabbi wants to keep it at bay. But the cat, who is madly in love with Zlabya, will do anything to stay by her side...even take his Bar Mitzvah! The rabbi has to teach his cat the rudiments of the Law of Moses! In a letter, the rabbi finds out that in order to keep his job, he must do a dictation exercise in French. To help him, his cat commits the sacrilege of invoking the Lord. The rabbi succeeds but the cat can no longer speak. He is treated once more like an ordinary animal. His only friend will soon be a Russian painter in search of an imaginary Jerusalem where black Jews apparently live. He manages to convince the rabbi, a former Tzar soldier, a singer and the cat to travel the colonial road with him...

more about: The Rabbi’s Cat

Also featuring among the films selected are those by Christophe Honoré, Vincent Garenq, Emma Luchini, Thomas Desagnat and Lidia Terki

Atiq Rahimi’s French-Afghan The Patience Stone wins three awards at the 50th edition of the Asturias film festival, with awards divided between Asian and European productions

Leconte talks about his collaborative project The Suicide Shop

The Suicide Shop by Patrice Leconte.

Michel Hazanavicus' film was king of the César ceremony with six awards, but Omar Sy surprised everyone by winning Best Actor 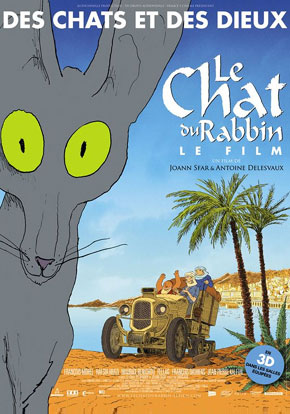 The director demystifies his brilliant, existentialist film noir which was decorated with Cannes’ Official Selection label in 2020 and is finally on general release in French cinemas