On 11th January 2008, hired by the City of Cleveland, lawyer Josh Cohen and his team filed a lawsuit against 21 banks, which they held accountable for the wave of foreclosures that had left their city in ruins. Since then, the bankers on Wall Street have been fighting by with all available means to avoid going to court… The film is the story of that trial. A film about a trial that may never be held but in which the facts, the participants and their testimonies are all real: the judge, lawyers, witnesses, even the members of the jury – asked to give their verdict – play their own roles. Step by step, one witness after another, the film takes apart, from a plain, human perspective, the mechanisms of subprime mortgage loans, a system that sent the world economy reeling. A trial for the sake of example, a universal fable about capitalism.

more about: Cleveland Versus Wall Street

A highly original, moving and enlightening documentary about the subprime crisis, shot in the US by Swiss director Jean-Stéphane Bron and unveiled in the Cannes Directors' Fortnight

“A process of disclosure”

After his behind-the-scenes look at Swiss Parliament in Le Génie Helvétique (“The Swiss Genius”), the director has tackled the subprime crisis in Cleveland Versus Wall Street

With two top awards going to The Little Room, in addition to a win for Cleveland Versus Wall Street in its category, the directors from French-speaking Switzerland claimed first place at the 14th...

On Saturday, March 12 in Lucerne, the winners of the 2011 Quartz Swiss Film Awards will be announced. For the moment, only the Honorary Award laureate has been revealed: producer Marcel Hoehn (T&C...

With 11 nominations, Xavier Beauvois’s Of Gods and Men dominates the list of nominees for the 2011 Césars, to be awarded on February 25. Next in line are Roman Polanski’s The Ghost Writer and... 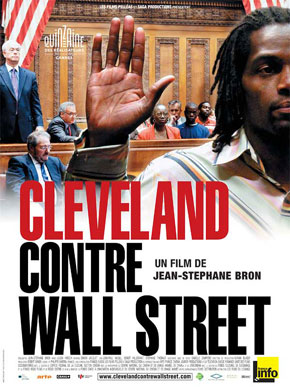