Meet Mahmud Nasir, loving husband, doting father and something of a “relaxed” Muslim. Does the “F” word occasionally pass his lips? It’s hardly worth mentioning. Does he say his prayers five times a day? Of course! Well, usually… Does he fast every day of Ramadan? Who’s counting anyway? He may not be the most observant, but in his heart he is as Muslim as it gets. But after his mother’s death a discovery turns Mahmud’s world upside down. He finds his birth certificate which reveals that not only was he adopted at birth…but he’s Jewish, and his real name is Solly Shimshillewitz! As Mahmud tumbles headlong into a full scale identity crisis, the only person he can turn to is Lenny, a drunken Jewish cabbie who agrees to give him lessons in Jewishness, which start with how to dance like Topol. Oy vey.

more about: The Infidel

Film London and BBC Films have revealed the 12 features that are shortlisted for their Microwave low budget filmmaking scheme. This year, the shortlisted teams will attend Micro-school - a...

Mark Simon Hewis has commenced principal photography at Bristol locations on his debut feature Eight Minutes Idle. The film is an urban comedy set in a Bristol call centre and is based on Matt...

The Jihadist cell in Chris Morris’ Four Lions is more demented than sleeper, a band of unhinged members who oscillate between disarming clumsiness and pure idiocy. The brains of the operation is... 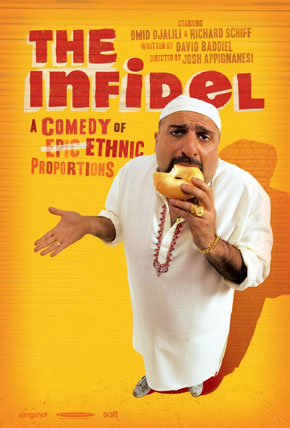