Luca (Bizzarri) sings in a left-wing, New Age socially-minded rock group. Camilla (Maggi) wants to study law. Given that love, like electricity attracts opposites they form a couple. But the flame of passion burns out very quickly Neither is achieving what he wants but they cannot live without one another.
Luca goes to a psychologist called Pietro (Kessisoglu) who is not tender with him since he believes in the motivation and independence. Luca finds himself surrounded by managers going through life crises who walk on hot coals. Camilla goes to a New Age psychotherapist called Blanda (Sacchi).
The two therapists are really husband and wife but they follow radically different systems. They do not resolve any of Camilla and Luca’s problems: they just make them worse. Everything is resolved when the four of them meet up together. The two couples quarrel, make up and switch partners to the extent that nothing is definite anymore.

Accorsi, Favino opting out of “easy life” in Africa

Coming out March 4 on 300 prints through Medusa, La vita facile (“The Easy Life”) by Lucio Pellegrini (Figli delle stelle, Tandem), sees the return to Stefano Accorsi, after starring in last...

Shooting began two weeks ago in Rome on Lucio Pellegrini’s Figli delle Stelle (“Children of the Stars”), produced by Beppe Caschetto and Rita Rognoni for ITC Movie and PUPKIN Production with... 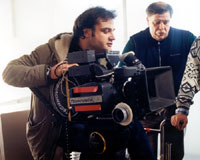