A veritable whirlwind of adventures and escapades, coincidences and revelations, sentiments and violent passions, vengeance, love affairs, all wrapped in a rhapsodic voyage taking us from Portugal to France, Italy, and as far as Brazil. In this Lisbon of intrigue and hidden identities, we encounter a series of characters all somewhat linked to the destiny of Pedro da Silva, orphan in a boarding school. Father Dinis, a descendent of the aristocratic libertines, later to become a hero who defends justice, a countess maddened by her jealousy and set on her vengeance, a prosperous businessman who mysteriously made his fortune as a bloodthirsty pirate; these people and many more cross paths in a story set in the 19th century as they all search for the true identity of our main character.

more about: Mysteries of Lisbon

SAN SEBASTIÁN 2018: Chilean director Valeria Sarmiento tells us about her latest film, The Black Book — a period piece in the running for the Golden Shell

The second feature by 78-year-old screenwriter and director Carlos Saboga is a story of obsession with political undertones, set in Lisbon during World War Two

Photo: An immersion into Portugal’s past from France

Portuguese director Carlos Saboga makes his debut with Photo, a feature produced by Paulo Branco that is competing in the CinemaXXI section at the Rome Film Festival

Lines of Wellington on the short list for Venice

José and Pilar to try its luck in Hollywood 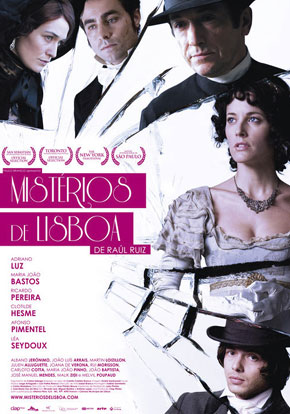