In Lecce, one of the most beautiful cities of southern Italy, people are waiting for the opening night of "Aida". The Opera piece will be set in a square and staged by a Moscovite company. Patron of the event is notorious crime boss Michele Verrio, while his lover, ex soprano Lunetta, is manager of the show.
Lunetta belongs to an aristocratic and music loving family. Her brother, the journalist Sergio, has left the city after Verrio's men blew his car up as a worning to stop him from carrying on an inquiry on mafia gangs.
Sergio is Mara's ex husband. Sabina was born from their union: the giri is now 19 and studies violin in America. Mara re-married, to Emilio: he's more reliable and down-to-earth than Sergio and has helped Mara bring Sabina up -even though he's had to engage in a "financial relationship" with Verrio for the purpose.
Sabina is coming back and Mara and Emìlìo go to the airport to meet her. But they find out that Giovanni, Verrio's son, has been studying in America too. Sabina and Giovanni arrive together and hold hands; Sabina is visibly pregnant.
The honest family is now destined to have a direct relation with the boss. Through a series of surprìsing and tragicomical events, we see the famìly's past, inner emotions that become influenced by financial needs, the establishment of new roles, the battle between good and evil and ali typical aspects of Italian reality. Here's Giovanni, ever so different from his father also because he's had the opportunity to get an education, and Sabina, the daughter of two fathers who compete with each other to win her affection... the kids will probably be able to put an end to the conflicts through their happy union.
Finally, the real truth hìdden behind the "Aida" show will make everybody face reality.

more about: Liberate i pesci!

Comencini and the hidden truths

Cristina Comencini, who is presenting, for the first time in competition in Venice, her eighth feature film La Bestia nel cuore, received a short but intense applause from the specialized press.... 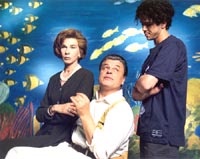