IF I WERE YOU

ANDREA is an employee. His wife, two children and mother-in-law all live with him.
His family life is suffocating, he hates his boring and monotonous job and dreams of being single and enjoying himself. BEBO BRASCHI-LENTINI is a successful entrepreneur. He has a very strong character which alienates him from everybody around him- everybody except his loyal and masochistic secretary Veronica who, despite his behaviour, adores him. Sadly the feeling is not requited: Veronica is completely ignored by her boss. CHRISTIAN DJs with his friend GEGIO in seedy venues or at couple-swapping parties. He is frustrated, does not have a penny to his name, is in love with a beautiful pharmacist CATERINA to whom he is not able to declare his affection and dreams of putting on huge pop concerts.
One day, Andrea, Bebo and Cristian meet coincidently at a beach-front restaurant. Suddenly there is a flash in the sky and the three of them find themselves transformed into the life of the person whom each of them had just been admiring. 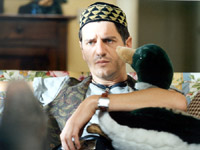 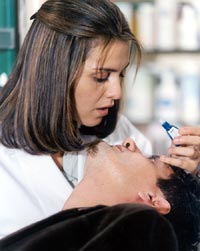 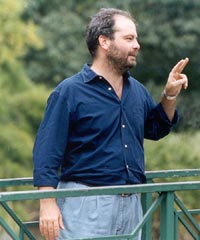