Every family has its secrets, but some are funnier than others. Naples, 1973. Nine-year-old Peppino Sansone has a big, chaotic family and an older cousin, Gennaro, who thinks he’s Superman. Peppino spends his days among the mad, colorful world of his young aunt Titina and uncle Salvatore, neighborhood dances, basement parties, women’s collectives, a home in which his mother has withdrawn into a mysterious silence, and a father who tries to distract him with pet fleas. But when Gennaro dies, Peppino’s imagination rewrites reality and brings him back to life, as if his cousin really was the superhero he always claimed to be. With the help of his imaginary friend, a Neapolitan Superman with shaky powers, Peppino will be able to face his family problems and better understand the adult world.

Naples and its diversity in the 1970s. An accomplished comedy for the debut film by a writer delving back into his memories.

Portrait of a family with kryptonite

"Kryptonite! is my childhood outlook on the 70s in Naples", explains the director Ivan Cotroneo

Teenage awkwardness, family and friendship are the themes around which Ivan Cotroneo’s new film, which is due to be released in Italian cinemas on 31 March with Lucky Red, revolves

Next Monday, the shoot will get under way in Udine for the new film by the author and screenwriter, based on his novel of the same name, published by Bompiani

“Imperfect mothers” make their first steps on the big screen

In Cannes with two films: "Much work and responsibility. We certainly were not met with open doors"

A N.I.C.E. November between New York and San Francisco

This year, the 22nd edition of New Italian Cinema Events will be organizing four marketplace days 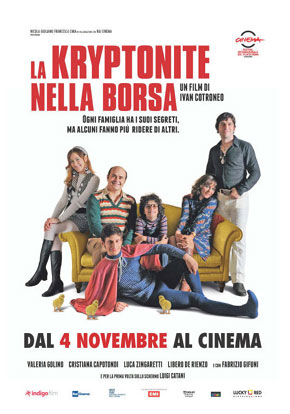