AS LUCK WOULD HAVE IT

The zest of life’ was the Coca-Cola slogan that once catapulted Roberto into an advertising career. But that was long ago. Nowadays, whenever this unemployed father contacts the company where he used to work his now-successful former colleagues feign absence. Nobody it seems has any time for the man that once invented Coca-Cola’s catchphrase. Desperate, Roberto is determined to at least pay a visit to the hotel where he once spent his honeymoon. But even this building has now disappeared and in its place excavations have unearthed a massive amphitheatre. A career-minded mayor and a thrilled museum director are excitedly looking forward to the grand opening of this gem of ancient history. But the members of the press present at the event all seem to be missing the point and Roberto is the only one who decides to take a closer look. In doing so, he takes a fall and finds himself caught unwittingly in a very precarious position. All of a sudden, it’s a matter of life and death and everybody takes an interest in him. Even Roberto is seduced into bargaining over the value of his life as a sensational event. LA CHISPA DE LA VIDA is a biting satire about the machinations of today’s sensation-hungry media.

more about: As Luck Would Have It

As Luck Would Have It

The director of The Last Circus applies his offbeat humour to the tragedy of an ordinary man, afflicted by the crisis and victim of harassment from the scavenging media.

“I reclaim dignity, because it is undervalued nowadays”

The vibrant former president of the Spanish Film Academy talks to Cineuropa about As Luck Would Have It, starring comedian José Mota and Mexican thesp Salma Hayek

“Skins is a film of contradictions”

BERLIN 2017: Eduardo Casanova unveils his first feature film, the impressively gutsy Skins, at one of the most prestigious of all the international film festivals

The Bar: The accursed eight

BERLIN 2017: Álex de la Iglesia corrals three women and five men in the titular drinking establishment, only to force them — and us — to endure a waking nightmare of anguish, violence and excess

The director of Marseille is all set to release her third movie, a co-production between Spain and Germany, starring the entertaining Juanjo Puigcorbé

China and Spain commit to co-productions

Pirate TV: "How does one reconcile idealism and ambition?”

Humorous winds of change from Michel Leclerc, and great European animation with Ernest & Celestine and Crulic: The Path to Beyond 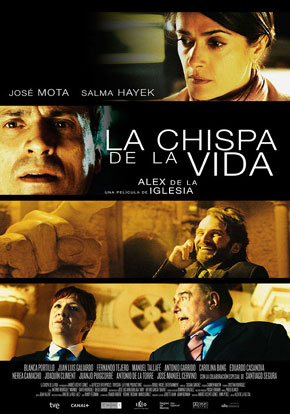