Pluto, the rock band that began its story fifteen years ago in the small town of Rosignano Solvay in Tuscany, Italy: a traditional rock band composed by voice, guitar, bass and drums that actually recorded two albums and had a song in a popular commercial on TV. However, as often happens, internal tensions and contrasting ideas brought them to break up. Today its components have to face much more practical problems: someone is looking for a job, others have a family. For all of them the Pluto experience is definitely over, at least until a fan calls them up to shoot a documentary.

A N.I.C.E. November between New York and San Francisco

This year, the 22nd edition of New Italian Cinema Events will be organizing four marketplace days

Film journalists declare Caesar Must Die film of the year. The most nominated films also include Easy! and A.C.A.B.. Award ceremony on June 30 in Taormina

April 21, the closing day of the 13th Lecce Festival of European Film (April 17-21), will see the announcement of the Award in Memory of Mario Verdone. The children of the famous Italian film...

"I’ve been waiting a lifetime to see an Italian film about a band, an imaginative comedy which would tell the misadventures of penniless musicians grappling with the utopia of rock'n'roll. I... 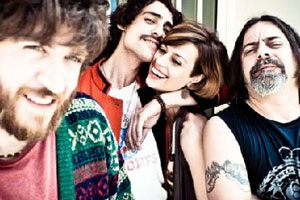