Conflict rages across Europe and the Nazis have occupied the Netherlands, but for twelve-year-old best friends Tuur and Lambert, not much seems to have changed: they still go to school each day, and still play "War" with their wooden guns in the forest and underground caves just outside their small village. But the realities of the conflict soon intrude on their familiar world: Lambert is bullied over his family's affiliation with the local Nazi party, while Tuur's parents and brother are mysteriously quiet on the subject of a resistance group rumoured to be developing in the town. When the boys begin to compete for the attentions of Maartje, a young newcomer to their class, their bond is put to the test. And when Maartje grows closer to Tuur, Lambert's jealousy sets in motion a series of events that will alter all three children's lives.

more about: Secrets of War

The new fund will invest €500,000 in boosting local productions and shoots in the Limburg area

Several titles have been shortlisted for the local film awards, the ceremony for which will be held on 6 March 2016

Two Luxembourgian co-productions are getting theatrical distribution this week

A crescendo of Dutch films on the festival circuit

Between Venice, Toronto and the upcoming Netherlands Film Festivals, Dutch films seem to be everywhere 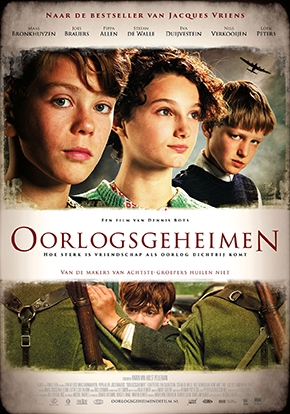