A small film crew arrives in Istanbul. They have been commissioned to make a film about the city for a minor TV channel. They start work immediately, filming interviews with the first people they meet, and then heading out onto the streets to film the many, very varied districts and denizens of Istanbul: an eccentric historian who believes that there was a civilisation of cats before humanity, a Sufi dervish who has opened a café for lovers and mad people, an Armenian journalist, an Alevi communist, a religious zealot and a philosophical tealady… One day in the cutting room, spooling through the footage, the director notices that some shapes and figures are there which he had not seen on the actual day of filming: - it seems that his camera has picked up the presence of ghosts. This idea fascinates the director, and soon begins to obsess him. He films deliberately in the more lonely, older neighbourhoods and at night in the hope of finding more ghosts. After a while, his crew abandons him to his obsession, and the director continues filming alone. As the director passes through this journey from daylight to darkness, from the living city to the city of the past, many aspects of life in Istanbul are touched upon: the destruction and renovation of old neighbourhoods, immigrant workers, resistance to the government, the many diverse religions and communities living in the city, the peculiarly melancholy essence of Istanbul.

With one DffB-produced title in competition and a host of productions and co-productions in the various sections of the important Bulgarian event, Germany is well represented 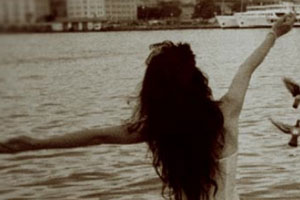