White Epilepsy, as we can remember, evoked the meeting of a man and a woman, or rather two archaic figures emerging from the depths of the night and images. Arrow slit is the second act of this trilogy whose “subject” as the filmmaker says “is anxiety’. What anxiety if not this throb, this agitation that makes us what we are and which lies at the core of our being, of our crafting of images. Philippe Grandrieux thus, since Sombre, pursues his exploration of our most intimate emotions. Here the bodies, taken once again in their nudity, become a quartet and are thus held in the working of a glorifi cation of their embodiment just as much as their disembodiment, disruptively inscribed in the very heart of the image. That which can be seen as a torso, leg or arm intertwined, offers the material for a ballet of fragments that have become flesh kneaded, manhandled, burnt only by the work with the light, the shadows and the frame of the assumed verticality. Bodies whose slowing down dictates the very movement of the fi lm : a continuous metamorphosis, relentless and without resting the image, its fulgurations and speechless tearing. A painting of bodies brought to the very limits of cinema – the object of murder? – which the sound, a piercing continuous bass like an inner scream, accompanies as a form of counterweight to the plasticity of the image and its unceasingly repeated movements. 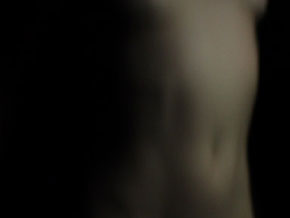