The Great Northern War is over, and Vice Admiral Tordenskiold, star of the victorious Danish-Norwegian fleet, has no clue what to do with his life. His valet, Kold, persuades him to go on a vacation arguing that now is the time to marry and settle down. The trip turns into a fun and freewheeling road movie through Denmark. Women swoon at the sight of the attractive young man. He is a 1720s version of a modern day rock star. Gradually, clouds start to darken, and in Hannover, the increasingly alarmed Tordenskiold is forced into a suspicious duel by former Swedish archenemies seemingly bent on revenge.

The international war drama, starring Trine Dyrholm in the lead role, began filming in and around Tartu on 29 August

After the war, Tordenskiold is ready for his real battle 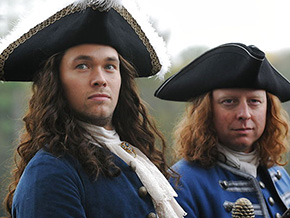