In a popular courtyard, Fonzino is building the Mother Tosello, a votive altar for the Madonna of the Hens, revealed to the community when on the day of the celebration the procession passes by. Hidden inside the holy cave – Fonzino and his lackeys - build fountains and statues of saints: outside the big wooden gate of the Tosello, the poverty and the smuggling life of the village goes on. Biaggino is a young peasant who works the land at the foot of Vesuvius, spending his life with the elderly women of his village, praying and organizing pilgrimages. Heir of an ancient tradition of prayers, he sings at the opening of both the celebrations, the religious one in the Church and the pagan one in front of the Tosello. He is a femminiello (omosexual male with feminine attitudes, a sort of transgender), but his values keep him separeted from the femminiello’s community of Pagani, who partecipate in local rites in a bizarre way. Ermanno is their leader. Stylist and priest housekeeper, he’s animated by a bigot devotion and is against the paganity of the commuity. He prepares altars and Madonna’s statues for the celebrations and follows the priest in the celebration of cerimonies. The unvailing of the painting of the Madonna, the chants of the Precious Blood and the Via Crucis announce the arrive of the Madonna of the Hens day. Fonzino fights with the preast to let the rite developing again, as his predecessor did. The community is capted by the rite’s call. In a ecstatic delirium, the statue goes out from the Church, marcing through ghettos towards the Tosello. Inside it Fonzino waits for the Vergin to knock on the door. Outside the appearance of the Madonna touches deeply the devotees’ souls. The drums cymbals roars, the dancers pear up, the Tosello’s doors open up to the light and to the pagans celebration. 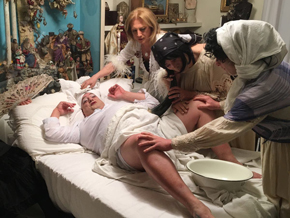 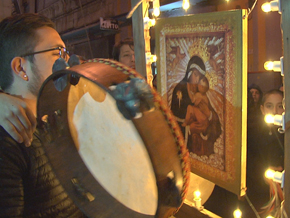