The voiceover says at the outset that a madhouse can be different things at different times: slavery, civil war, a puppet regime. Today, it’s a psychiatric hospital in Maputo, bright walls without, dark corridors within, both accentuated by the crisp black and white. Ernania is a patient there, she coaxes music from her bed so enchanting it could carry you away. When the gate is left open one day, she seizes her chance and a journey begins. But the path doesn’t proceed from A to B, but rather from one beguiling location to another, each flowing into the next with logic of a trance: a recording studio, a cinema full of goats, a boat on a tilt on the mudflats. Ernania was always looking for her husband and son and finds them with ease, but somehow they disappear again at will, just like the other strange objects she stumbles across, the aeroplane fashioned from a hospital bed or the statue of wire. When Ernania and her son stare at the sun, they see the whole continent before them, a terrain, like the film, as rich in references and allusions as a dream. The voiceover also says escape lies in dreams, but that was in the past. Today, it’s in your dreams that they sense you’re there.

more about: Our Madness

VENICE 2019: We chatted to Pascal Diot, head of the Venice Production Bridge, to gain an insight into this year’s iteration of the major Italian industry event

BERLIN 2018: The second feature by Portugal’s Sandro Aguilar is an anti-narrative experiment that unfolds in a nightmarish version of Lisbon 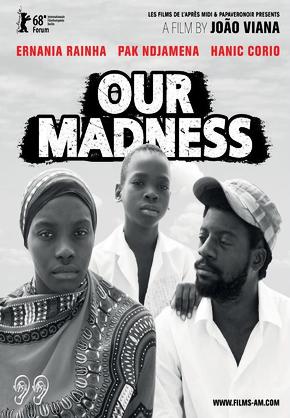