The human and artistic endeavor behind the creation of Elvira, the play by Toni Servillo, co-pro- duced by Piccolo Teatro in Milan and based on the classes held by Louis Jouvet at the Conservatory of the Dramatic Arts in Paris in 1940. With JouvetÕs lessons in mind, Servillo and his young acting troupe debut at the Venice Biennale, perform in Naples and Milan and finally take the stage at the Théâtre de lÕAthénée in Paris. ItÕs a performance that becomes a dialogue between Servillo and the other actors on their craft, and the ethics of acting.

more about: Theatre at Work 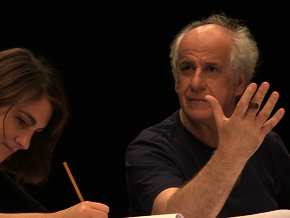