Georgie (Macdonald), sometime sailor, diver and nurse used to have guts. But somehow she has lost her way. Stranded in a remote fishing town on the West Australian coast she’s living with a man she doesn’t love, Jim (Wenham) and his young sons whose dead mother she can never replace. But a reckless moment leads to a life-changing encounter with Lu (Hedlund), an enigmatic loner, one time musician and sometimes poacher, outcast from the community. The two are powerfully drawn to each other and embark on an inescapable, intense and sexually charged affair. Georgie will risk everything for this chance of love, but Lu is haunted by a tragic accident from his past. For him the prospect is too painful and he retreats into the wilderness to the remotest islands leaving little clue as to his whereabouts. With the unlikely help of Jim who is determined to right the wrongs of his own past, Georgie embarks on a journey to bring Lu back from his past and his grief, ultimately finding herself.

Passions run high in Gregor Jordan’s overly melodramatic story of love, grief and trauma set against the backdrop of the Australian Outback 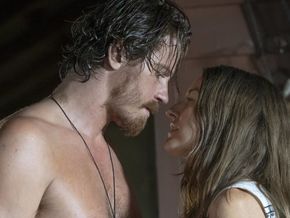