Audrius Mickevičius puts the horribly disfigured face of his murdered brother at the start of his film. He’s interested in the question of how someone atones for such an act. With regard to this particular crime one could say: far too short, because the murderer is released after only five years on the grounds that he proved himself to be an exemplary prisoner. Mickevičius doesn’t confine himself to this individual case, though, but raises his film to a more general level: Exemplary Behaviour is almost a meditation about the question whether a final act like murder can be atoned for in a temporal order – and whether the passing of time allows the victim’s family to forgive. Mickevičius uses the example of two lifers (one of them gets married and wants to have children, the other pours his whole passion into an idea of craftsmanship) and a philosopher with prison experience (Bernhard Stiegler) to make that strange state of suspended life comprehensible. The elegiac undertone is finally reinforced by the information that Audrius Mickevičius fell ill and died during the production of Exemplary Behaviour. The film was completed by Nerijus Milerius. 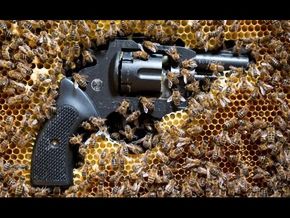