IN BED WITH A WRITER

A friendly, beer-bellied gentleman in boxer shorts and glasses slouches on a couch behind a big shop window in the busy historic city centre of Tallinn. He greets the puzzled, giggling passers-by, along with a simple cardboard sign in the corner of the window that says “Begging for Love”. This nice man next door is the Estonian writer Peeter Sauter. And when he writes, he’s not nice, he provokes with coarse language. He feels close to Charles Bukowski, but as an Estonian writer he’s enough of an outsider. Sensitive, honest and delicately staged, Manfred Vainokivi encounters this man in his late fifties and in the middle of a writer’s and life crisis in his film. Sauter still sees himself as a little boy, but after a divorce his concern now is which woman could be interested in an old, fat man. He philosophises in the nude, sitting in front of the washing machine with a bottle of beer. The artistic provocateur reveals a deep romantic longing. He exposes himself to comic and irritating role-playing games to reach new horizons of experiences: sleeping on his parents’ grave, learning striptease and modelling for a racist photographer and his terrible motifs. In all his melancholy, Peeter Sauter still walks towards life: “Do you know anyone, who’s gotten anywhere just by thinking?”

more about: In Bed With a Writer 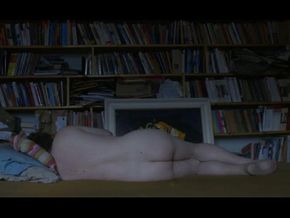