Three Minutes - A Lengthening presents a home movie shot by David Kurtz in 1938 in a Jewish town in Poland and tries to postpone its ending. As long as we are watching, history is not over yet. The three minutes of footage, mostly in colour, are the only moving images left of the Jewish inhabitants of Nasielsk before the Holocaust. The existing three minutes are examined to unravel the stories hidden in the celluloid. The footage is imaginatively edited to create a film that lasts more than an hour. Different voices enhance the images. Glenn Kurtz, grandson of David Kurtz, provides his knowledge of the footage. Maurice Chandler, who appears in the film as a boy, shares his memories. Actress Helena Bonham Carter narrates the film essay.

more about: Three Minutes - A Lengthening

VENICE 2021: The Dutch historian uses an amateur clip lasting three minutes, filmed in 1938 in a Jewish town in Poland, as her starting point to craft a work with a strong emotional impact

The 24th edition of Israel's biggest documentary festival will present a total of 122 films, including 26 world and three international premieres

Steve McQueen returns to the documentary realm with Occupied City

The British artist and filmmaker is in production on his first feature-length doc, focusing on his adoptive city of Amsterdam amidst World War II

Sundance 2022 is a go, and European co-pros are invited

The fabled event based in Park City, Utah, will once again celebrate a virtual edition, with 27 European co-productions in tow 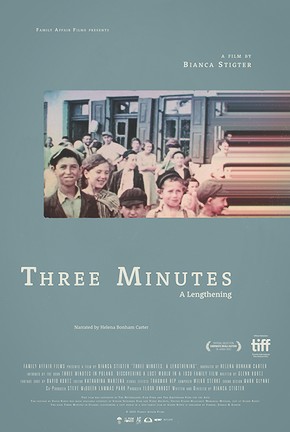