MOM IS NOT CRAZY

Aready on their second date, Amira took Michael to meet her therapist, so that the therapist could explain to him about her mental state. Michael wasn't alarmed. They now have four children together, even if they live on the edge. Michael knows all the fastest routes to the emergency room and the psychiatric ward. Amira decided to stop hiding her mental illness (Borderline Personality Disorder) and to open up about her condition to her community. As a religious woman, she discovers that the restrictions of Jewish law make things especially difficult, but this only goads her to study the issues so that she can bring about a change in attitude among rabbis and the religious authorities toward people struggling with mental illness. This film tracks Amira's dramatic struggle to stay alive, raise her children and examine what it means to be normal. 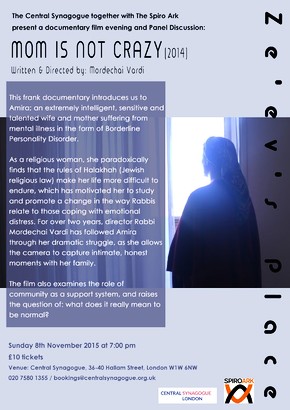