The story of Giuseppe Garibaldi's 1849 campaign to free Italy from Austrian domination. Although the defence of Rome has become impossible, Garibaldi declares his intent to continue the struggle for republican liberty and a unified Italy. With a following of four thousand men he begins a march across the Apennines with the aim of reaching Venice which is under siege but still resisting. However, the Bourbons and the Austrians pursue the volunteers who have in their ranks Frattini, a traitor secretly working to disunite the small but brave force. Many in fact desert and even the most loyal officer, Bueno, gives in to Frattini's proposals to impose summary justice. Anita Garibaldi, whom her husband had left behind in Rome because she was expecting a baby, rejoins him, and her influence, courage and vivacity succeed in restoring unity. San Marino gives refuge to the surviving force and the Austrians offer a cease-fire. But the terms of surrender proposed by the Austrians are so severe that Garibaldi prefers to disband his men, and during the night leaves for Venice with a few faithful. Many Garibaldi supporters are shot and Anita also dies. Garibaldi and Bueno manage to escape with the help of local peasants. 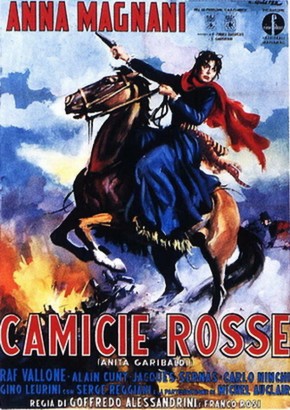