Band is the make or break it story of an all-female Icelandic art rock band that probably will not make it and isn’t really a band. Band is a comedy of failures, seen through the eyes of three women of “The Post Performance Blues Band" who give themselves only one year to finally become popstars or quit forever. Each on the brink of 40, they find themselves again coming of age, reckoning with their artistic dreams & the meaning of friendship as they juggle the pressures of motherhood. Playing creatively with the documentary form, the film makes meaning out of life's messiness and finds resilience in rejection. Band tells a big little story of triumphant sisterhood.

There’s no telling if everything’s true in Álfrún Örnólfsdóttir’s Icelandic doc, but here’s hoping it is

“This is women embracing failure on stage”

The Icelandic director invites us to give it up for her very own The Post Performance Blues Band (ThePPBB). And no, they are not joking 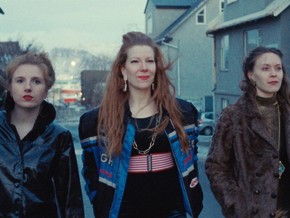