A FEW DAYS IN SEPTEMBER

September 1, 2001. Elliot, an American spy, decides to disappear with some crucial information. At the same time, he tries to see his daughter, Orlando, who he abandoned ten years before. Irene, a long-standing friend, must organize this meeting in Venice, accompanied by Elliot’s adoptive son, David. But they didn’t factor in the presence of William Pound, an unscrupulous killer and amateur poet.

more about: A Few Days in September

Policewoman seeks revenge in Another Silence

Another Silence revolves around a powerful female character, and is the new film from Argentine director Santiago Amigorena (Quelques jours en septembre) presented on the eighth day of the Venice...

Croze stars in Amigorena’s Another Silence

On November 22, Santiago Amigorena will start shooting in Argentina on his second feature: Another Silence. The director, who shot to attention with A Few Days in September (selected out of...

Unifrance’s 11th French Film Festival gets underway this Thursday in Budapest, where it will run until April 22 and until April 25 in six other Hungarian cities (Debrecen, Pécs, Miskolc, Szeged,...

Unifrance, the international promotional agency for French cinema, is stepping things up a gear on British territory with A Rendez-Vous with French Cinema, which kicks off in London on Thursday. A...

Leaving local flamenco traditions aside, the European Film Festival of Seville will open its third edition tomorrow night under the influence of Mozart's The Magic Flute. Kenneth Branagh's...

The beginning of September is distinctly French in local theatres, with four ambitious domestic films and two minority co-productions out of a total of 12 releases opening today. Straight from... 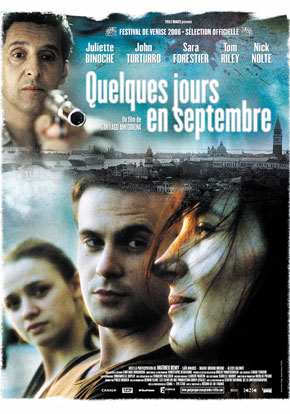