Newly married lawyer Lucien Lambert allows his brother to persuade him to take on a case that could make his name as a top notch defence lawyer. This is how Lucien comes by his client Blanche Kaplan, who is suspected of her husband’s cold-blooded murder. Although Blanche has a perfect alibi, the murder weapon – the knife with which Paul Kaplan was stabbed to death – is covered with her fingerprints. During his research Lucien begins to investigate the Kaplan’s empty house in detail. Here he meets the beautiful yet mysterious Marguerite, who has taken over the house as if it belonged to her. Lucien and Marguerite embark upon a game that is a mixture of persecution and seduction. Before long, they begin to behave like a married couple: he comes home from work, she makes their evening meal, they eat and talk about life and love … Their actions are observed by Louis Berger, a plain-clothes policeman. During one of their nightly encounters, Marguerite admits to Lucien that she had an affair with Paul Kaplan, which also makes her a suspect. But for Lucien it’s too late for such considerations. Not only does he understand Marguerite – he has fallen head over heels in love with her. But Lucien is a married man and, apart from this, somewhere out there Louis Berger is still searching for the truth.

The title of French film Guilty by Laetitia Masson - which screened at Berlin in the Panorama section - is deceptive, for beyond the Cluedo-like murder mystery, the director explores an altogether...

Marina Hands, Elodie Bouchez, and Clémence Poésy are to star in the director’s new film, which is also the first feature to be produced by Mirwais

Five women directors get advance on receipts from CNC

The forthcoming films by Laetitia Masson, Katell Quillévéré, Lucile Hadzihalilovic, Axelle Ropert and Nadège Trebal are among the seven projects selected at the last 2011 session of the second...

Rezo Films: "The freedom of being independent"

A “factory” of feelings in Panorama

As the 58th edition of the Berlin International Film Festival (February 7-17) approaches, the list of French hopefuls vying for a place in one of the festival sections is giving rise to much... 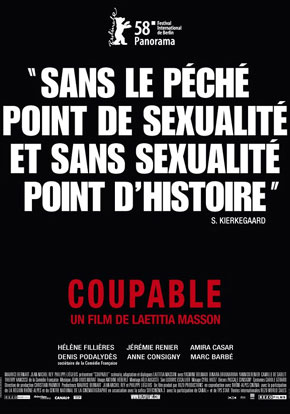