On a fashionable nightclub dancefloor in Lima, a girl kisses boys, one after another, watched by her jealous brother Diego. The latter, in love with his sister Andrea, struggles with his nocturnal solitary and guilty pleasures. Andrea has her mind elsewhere and her own secrets to keep hidden. The two adolescents live apart from the world, far removed from the reality of their country, in a world in which even their laughter rings false, and servants stand in for absent mothers. But in their luxurious family villa by the sea, Diego and Andrea are above all disconnected from themselves and from what they might become. Their father Agustín, for his part, has brought his new girlfriend Elisa to the house. She is twenty years younger than he is, from a poor background, and lacks the reference points of the upper-crust society she now moves in. Taking place over a summer during which the young immerse themselves in sex and alcohol, Dioses dissects the malaise of a privileged Peruvian generation. 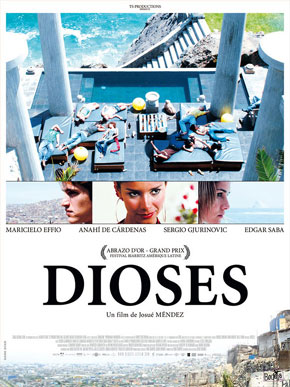