After 22 years in prison, Widmer, an ex-terrorist from the RAF (Red Army Faction, initially known as the Baader-Meinhof Gang) has been released. With the help of his lawyer he tries to rebuild a life in the anonymity of a large apartment block. His neighbour Valerie displays a mixture of mistrust and fear towards him. A police officer is roaming about and frequents the house, and a few old connections come back to the fore. The man and woman hide a common secret that will reunite them beyond the painful memory and the break with the past.

Long Shadows in the Eternal City

Two domestic terrorist dramas from Germany are part of the line-up at the Rome International Film Festival: the big-budget action drama The Baader Meinhof Complex and the intimate Long Shadows....

Another perspective on the RAF

Despite the general economic crisis, approximately 5,000 Spanish cinemagoers attended the 11th Festival of German Films in Madrid (June 2-6). The festival opened the sold-out screening of Hilde,...

150 features to screen at Rome, with many European films in competition

No longer known as the RomeFilmFest at the behest of president Gian Luigi Rondi (who has also decided to “Italianise” the names of the different sections), the Rome International Film Festival... 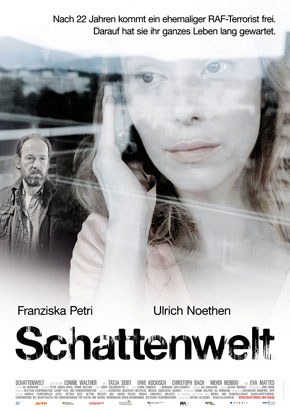