On the one side is Naterris, a giant multinational agro-chemical company, with a turnover of €9bn. On the other side are Zaccharias, Mélanie, Denis and Kevin, an oyster-farmer, an accountant’s assistant, a restaurateur, a blue-collar worker... They are ordinary people. In between them is a lake polluted by Naterris, beside which these ordinary people live. After two years of bitter legal proceedings, Naterris is ordered to pay them a ridiculously small amount of compensation, even though they have lost everything. Unlike the other complainants who are willing to accept this meagre sum, these four decide to appeal the decision so that justice is "truly" done for them. But they only have 30 days in which to appeal and they absolutely must discover a new piece of evidence at the headquarters of Naterris, whose imposing skyscraper overlooks the square at La Défense. Mélanie, Zaccharias, Kevin and Denis thus decide to make the journey to Paris. Their mission isn’t impossible but promises to be... very, very difficult!

La Tendresse, a comedy of manners with autobiographical aspects directed by Marion Hänsel, is released today in Belgian theatres

Pierre Jolivet (photo) will look at the fight against arms and drug trafficking in his fourteenth feature, Mains Armées (“Armed Hands”), which will start shooting on Monday in Paris. In his new...

A group of provincials, including an oyster farmer and a restaurant owner, find themselves out of work due to the pollution of the lake next to which they lived and worked. Multinational...

Erik Van Looy has finally met his match, as 007 fever sweeps through Belgium this week. Released by Sony Pictures, Quantum of Solace hits screens accompanied by its press and publicity machine.... 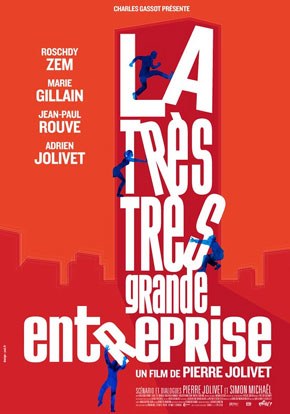