Deep in the heart of the Appalachian Mountains in West Virginia, where every man owns a gun and a moonshine still, in a battered trailer, abides living legend Jesco White, 'the dancing outlaw'. As a boy Jesco was in and out of reform school and the insane asylum for taking drugs, stealing lighter fluid and for his wild behaviour. To keep him out of trouble, his daddy D-Ray taught him the art of mountain dancing – a frenzied version of tap dancing to wild country banjo music. After his daddy’s murder at the hands of a pair of drunken rednecks, the crazy but charismatic Jesco out on his daddy’s shoes, danced his way round the bars of the county where he met the love of his life, Cilla, who happened to be twice his age and half his height. The odd couple tried to settle down but tortured by the thought of his daddy’s killers still at large, Jesco’s demons resurfaced.

Murphy gets some Culture

Croatia's largest international film event, the Zagreb Film Festival, will have its biggest programme ever, with over 160 screenings in nine sections for its seventh edition, to be held October...

At the 20th Dinard British Film Festival (see news), the Golden Hitchcock for Best Film went to Dominic Murphy’s White Lightnin'. Unveiled at Sundance and lauded in the Berlinale Panorama 2009...

As their film White Lightnin', directed by Dominic Murphy, has its European premiere tonight in the Panorama sidebar of the Berlinale, UK production house F&ME has unveiled a multi-film... 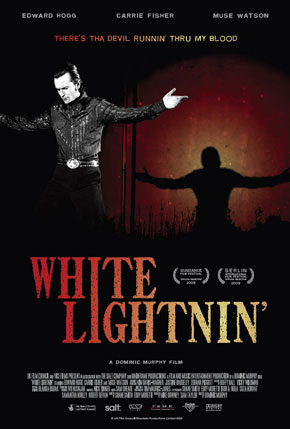