The film is based on the true story of the resistance fighter Max Manus, and follows Max from the outbreak of World War II until the summer of peace 1945. After having fought against the Russians during the Winter War in Finland, Max returns to a Norway occupied by the Germans. Very soon he joins the active resistance movement, and becomes one of the most important members of the so-called Oslo Gang, led by Gunnar Sønsteby. Among other activities, they carry out spectacular raids against German ships in Oslo harbour. Maybe the most well-known attack was the sinking of the slave ship Donau.

The downside is that only one local feature premiered last year qualified for the top ten, which was dominated by US products

Three films about the Norwegian Arctic explorer had applied for government funding, but Sandberg’s project has received the go-ahead

Cineuropa met up with Norwegian director Roar Uthaug, whose fourth feature, The Wave, screened at Toronto, is Norway's submission in the Oscars race

The Norwegian pubcaster is launching one of its most expensive TV drama series, which has already been sold to several territories, including the US

Erik Poppe starts principal photography for The King’s Choice, a film about “three of the most dramatic days in the history of Norway”

Victoria by Knut Hamsun brought to the screen 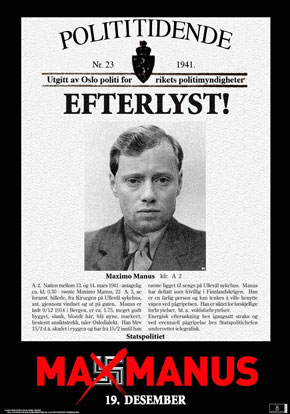