Famous news radio station R2I sends its best duo of reporters – journalist Frank and sound engineer Poussin – to Iraq. Very soon, millions of listeners are following their well-researched, "on-the-spot" reports, reflecting the intensity of the conflict and the difficult survival of the population. The day Frank and Poussin are taken as hostages, a large-scale solidarity movement is organised to secure their release: rallied around the slogan "a euro for our hostages", there is a mass mobilisation of French people. But the major concern for Frank and Poussin, our two very special correspondents, is not really the hostage-taking: their true problem is that they’ve never set foot in Iraq, and the breathless reports that have made them famous are recorded from the Barbes area of Paris.

Special Correspondents to get Netflix release

The year has got off to a good start at the French box office, with 14.9m admissions in January, representing an increase of 3.8% compared to the same period in 2008, according to the National...

Nine European productions dominate the line-up of 13 new releases hitting French theatres today. The largest print run belongs to a French comedy about journalism and the power to manipulate... 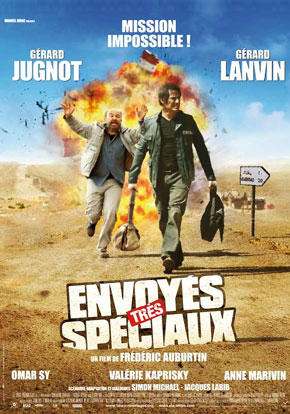