Bilal is 17 and comes from Iraq. He left his native land shortly after his girlfriend emigrated to England and is now in the midst of an adventurous journey across Europe in order to see her again. However, his trek has now come to an abrupt end here on the northern coast of France and he can go no further. Between him and his girlfriend Mina lies the wintry English Channel, its waves whipped into a frenzy of peaks and troughs by the strong gusts of the north-west wind. Bilal is stranded in Calais. A stretch of water measuring 32 kilometres separates him from the nearest English town. In a flash, the boy decides to head for the local swimming pool in order to begin training. This is where he meets lifeguard Simon, to whom he eventually confides his grand plan. Simon takes Bilal under his wing and secretly teaches the young Kurd how to crawl…

Welcome is a moving encounter between a French swimming instructor and a young Kurd dreaming of England. A well-scripted and well-researched film on the realities of illegal immigration 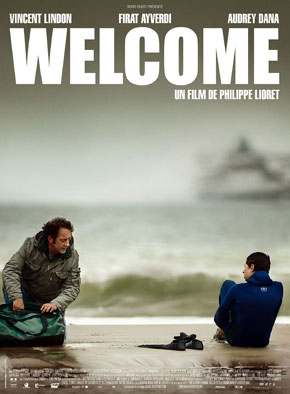