THE FRIENDS AT THE MARGHERITA CAFÉ

Bologna, 1954. Taddeo, a young man of 18, dreams of coming one of the regulars of the mythical Margherita Café, found under the portico across from his family’s home. Through a ploy, he manages to become the chauffeur of Al, the neighbourhood’s most glamorous and mysterious resident. Having been taken under Al’s wing, Taddeo gets to witness the adventures of Bep, who is in love with Marcella the entraineuse, the trials and tribulations of Gian, an aspiring singer and the victim of a horrible practical joke, the crazy behaviour of Manuelo, a small-time robber with a phobia for sex, the meanness of Zanchi, inventor of the elastic necktie and the bizarre manias of Sarti, a ballroom dancing champion who wears his tux day and night. And Taddeo’s home life is no less out of the ordinary, seeing that his mother is being led on by the family physician, while his grandfather has fallen head over heels for a well-built piano teacher. In the end, Taddeo, whom everyone calls “Kid”, manages to gain acceptance as a regular at the Margherita Café.

more about: The Friends at the Margherita Café

The Festival of Italian Cinema in Tokyo (April 28-May 4) celebrates its tenth edition this year. The event, which takes place in the Japanese capital during Golden Week (the country’s most...

Aided by bad weather, Easter weekend figures were generally positive, with overall box office clocking in at €9.6m (according to Cinetel data, which covers approximately 85% of the domestic...

Avati’s “amarcord” at the Bar Margherita

After the dramatic Giovanna’s Father (which won Alba Rohrwacher the Coppa Volpi at the latest Venive fest for Best Performance), Pupi Avati is back in cinemas with Gli Amici del Bar Margherita...

While the 2009 slates of Italy’s independent distributors include numerous, much-awaited domestic titles, majors 01 Distribution and Medusa Film are coming out with the top local titles of next... 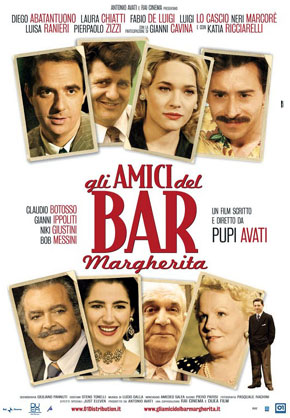